Amazfit GTR 3 Pro, GTR 3 and GTS 3 to launch in Malaysia Heads up fitness and smartwatch enthusiasts, Amazfit Malaysia has just announced that they will be launching three new exciting smartwatches in Malaysia, they are the GTR 3 Pro, GTR 3 and GTS 3.

These new smart watches not only bring improved health tracking features over their predecessors but are also powered by Zepp OS, a lightweight and feature-rich operating system that has lower power consumption compared to the previous smartwatch operating system, it supports Android and iOS devices, syncing fitness data to platforms such as Apple Health, Google Fit, Strava, Relive, Runkeeper and TrainingPeaks.

Boasting a vibrant 1.45-inch, 480×480 AMOLED display, the GTR 3 Pro is the crème de la crème among the trio that offers a premium classic watch design with sophisticated fitness tracking features, it offers a class leading 12-day battery life which is unmatched by many other premium smartwatches.

Even with continuous GPS usage, the GTR 3 Pro lasts up to a whooping 35 hours. Weighing at only 32g, the GTR 3 Pro keeps your health in check with an advanced six photodiodes BioTracker PPG 3.0 biometric sensor, which allows users to track multiple health metrics at the same time and therefore, it has a One-tap Measuring feature that measures heart rate, blood oxygen saturation, stress level and breathing rate in 45 seconds with just one tap, unlike most smartwatches that requires you to measure these metrics in individual apps. With over 150+ sports modes, the GTR 3 Pro intelligently recognizes eight types of sports as you start working out, it is also 5 ATM water resistant which Amazfit claims that will also resist sea water. Other advanced fitness tracking features include PeakBeats and Virtual Pacer, with the former that keeps users informed of their workout performance and the latter that lets you challenge yourself with a virtual runner that takes on your previous results. 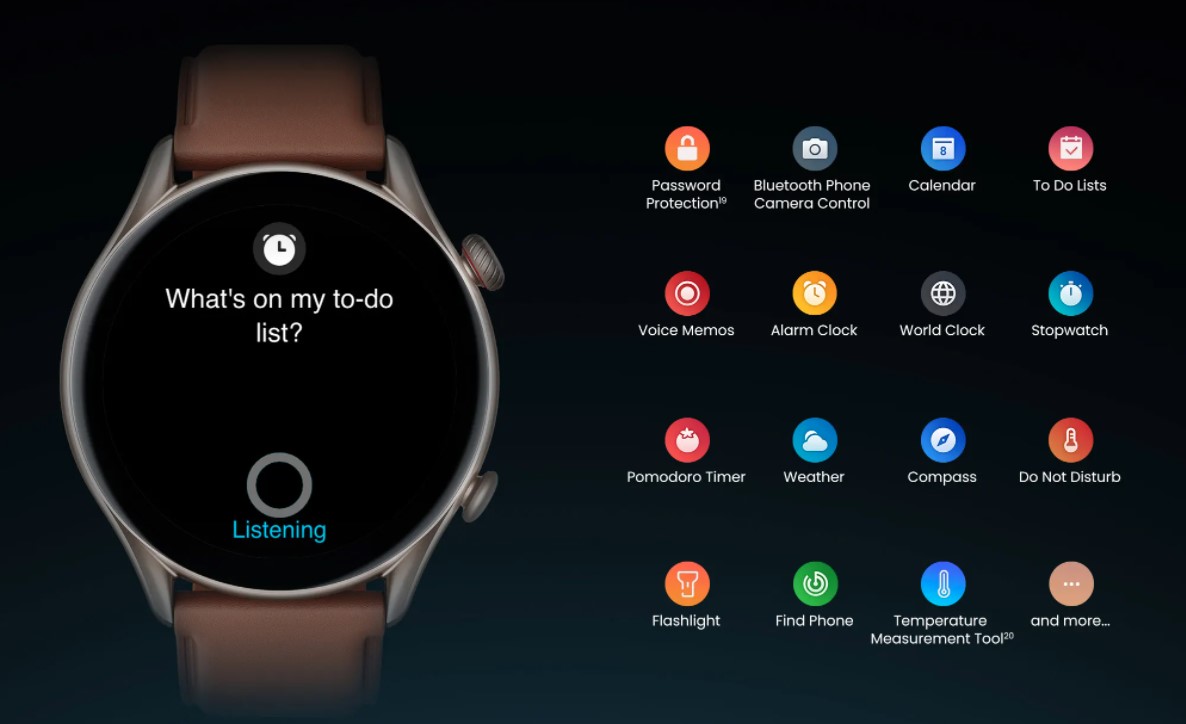 Users will find the GTR 3 Pro a very practical smart watch, as it offers a physical crown for navigation when touching the screen isn’t possible, it also comes with a built-in loudspeaker that lets you listen to music and incoming calls, an offline voice assistant and Alexa voice assistant, and store up to 470 songs with the watch’s 2.3GB memory.

Boasting a whooping 18-day battery life, the Amazfit GTR 3 keeps up with your workouts in a lightweight and durable aircraft-grade aluminum alloy body, it comes with a stylish antibacterial strap that keeps you comfortable for all-day wearing and during sleep.

Sporting a 1.39-inch AMOLED HD display, the GTR 3 comes with the same set of sophisticated fitness tracking features as the GTR 3 Pro, which you will also get the one-tap measurement feature that measures your heart rate, blood oxygen saturation, stress level and breathing rate. For those who prefers a larger screen and square watch face, the Amazfit GTS 3 is one smartwatch you don’t want to miss, as it comes with a 1.75″ AMOLED Ultra HD display and lasts up to 12 days on a single charge, it features a classic crown for navigation, 150+ sports modes, the same advanced BioTracker PPG 3.0 biometric sensor as the GTR 3 Pro and Alexa voice assistant support.

How much and when can you buy them? Amazfit Malaysia has confirmed that these three smartwatches will be available at 5th November on the official Shopee store.

However, no pricing details have been revealed to us yet, though we expect the flagship GTR 3 Pro to have a sub RM1,000 price tag while the GTR 3 and GTS 3 to be priced around RM600-RM700, so stay tuned for more on this space for more details about these great Amazfit smartwatches.