The algorithm analyses the surrounding noise that is picked up by the microphones and activates the bone conduction sensor when wind noise is detected. The sensor will then transmit voice via jawbone vibrations so that the user’s voice will remain clear. 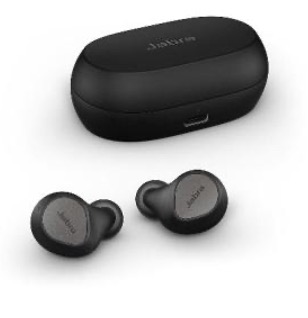 Similar to the Jabra Elite 85t that was launched months ago, the Jabra Elite 7 Pro will also come with Active Noise Cancellation; however, this ANC mode is adjustable so users can control the amount of surrounding noise they want to reduce. It’s using a 6mm driver, just like the rest of the new products in the lineup.

Jabra also announced that these earbuds will support multi-connectivity, and can be used individually — this is something its older earbuds were unable to achieve. The battery life is slightly improved too; users can enjoy up to 9 hours of playback with ANC on, and up to 35 hours when used with the case.

In addition to that, Jabra implemented its ShakeGrip technology that uses liquid silicone rubber for more friction in the ear canal and a wing-free design. The latter is to ensure that the earbuds look discreet without sacrificing comfort. Jabra also designed these earbuds after going through 62,000 ear scans to find the optimal fit that will fit snugly in the user’s ears.

The Elite 7 Active also sports the same battery life as the Elite 7 Pro and has the same adjustable ANC. Although it doesn’t have a bone conduction sensor, it makes up for that by using a microphone mesh that removes wind during calls. It’s almost on par with the Elite 7 Pro, featuring an IP57 rating and supporting mono mode (using one earbud on its own).