It has been a frenzy week of smartphone launches and it hasn’t ended yet, as the Black Share 4 series gaming phones have been unveiled to the public with several interesting features that will finally make you want to own a gaming phone. For starters, two models are being announced by Black Shark – the Black Shark 4 and Black Shark 4 Pro, both phones are rather identical when it comes to design and the only way that you can tell them apart are their specs sheet, though fortunately they feature the same 6.67″ FHD+ Super AMOLED panel that pushes 144Hz refresh rate and an impressive 720Hz polling rate, a 4500mAh battery with 120W fast charging and stereo speakers. In terms of cameras, the Black Shark 4 Pro features a higher resolution 64MP f/1.8 main sensor as opposed to the non-Pro’s 48MP f/1.8 main sensor, otherwise they both feature the same 8MP ultrawide angle lens and a 5MP f/2.4 macro lens, both phones are capable of shooting 4K videos up to 60fps. On a side note, the Black Shark 4 Pro has a better 20MP selfie camera with a faster f/2.0 aperture, which should result in brighter selfies in low light.

What mobile gamers would be really excited about is the mechanical pop-up shoulder buttons, which offers better precision and tactility when playing touch based games, they can also be configured as shortcut keys for taking screenshots, screen recordings and more. Black Shark also teased Cinematic Audio on their stereo speakers that has gained No. 1  in DXOMARK’s audio benchmark, which is all thanks to inputs from senior engineers from DTS, Cirrus Logic and AAC Technology, audio recording is also improved with the “Vocplus Gaming” AI noise reduction technology that’s co-developed with Elephant Sound.

Unlike their predecessors, the Black Shark 4 series has taken on a minimalist design and doesn’t have any flashy RGB lights, instead it has a holographic X reflection on the back case that looks unique and maintains the brand’s quintessential “X Core” design. Cooling capabilities has also been upgraded with a new generation Sandwich liquid cooling, which independently cools down the 5G network chip, SoC, and 120W charging chipset.

Black Shark has also launched the new FunCooler 2 Pro cooler that promises up to 15% better cooling efficiency than its predecessor and a “normal” and “Pro” 3.5mm earphones in conjunction with Black Shark 4 series. 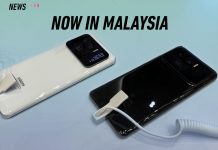 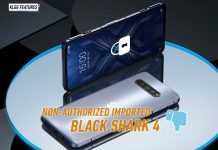