The Samsung Galaxy A72 was launched alongside the Galaxy A52 and A52 5G today during the Galaxy Awesome Unpacked Event. Fortunately, we had the chance to try out the Galaxy A72, so here are my initial thoughts of it.

Contents hide
1 S21 inspired the Galaxy A72?
2 No 5G…what?
3 All in all, decent cameras
4 Bigger battery, same fast charging The Galaxy A72 is available in four colours — Awesome Black, Awesome Blue, Awesome Violet and Awesome White. Ours is in Awesome Black in which it looks and feels very matte thanks to its matte haze finish.

The phone feels a bit sandy texture-wise, but it’s still nice to touch and doesn’t attract fingerprints. Its camera bump it also inspired by the Galaxy S21 series that features a contour cut design — in this case, the Galaxy A72 has a camera housing that isn’t bulky and matches its overall colour. Although the Galaxy A72 has a similar 6.7-inch Super AMOLED display like its predecessor, Samsung upgraded its refresh rate from 60Hz to 90Hz refresh rate. It feels smoother when scrolling and browsing, plus it also comes with the eye comfort shield feature that minimises blue light for better eye care. The display is also brighter than before — Samsung increased the peak brightness from 700 nits to 800 nits.

Equipped with a Snapdragon 720G chip, the Galaxy A72 handle games like PUBG, Call of Duty and Mobile Legends well. The only downside is the lack of 5G connectivity — those aiming for a future-proof will find this a turn-off. In fact, this is probably the biggest con of the Galaxy A72, but there’s a chance that Samsung will bring a 5G variant in the future. However, the storage is expandable up to 1TB via a MicroSD card slot, in addition to its existing 256GB of storage and 8GB of RAM.

All in all, decent cameras Moving on to the cameras, the Galaxy A72 takes good selfies with its 32MP lens. There’s good amount of details paired with natural colours, plus I also get AI beautification — you can opt to turn this off if you’re not a fan of said feature.

Its rear camera setup comprises of a 64MP wide lens, a 12MP ultra wide lens, an 8MP telephoto lens and a 5MP macro lens. Colours can be slightly inconsistent depending on the amount of light, but most of the time we’re getting natural colours and really good details, especially with the high res mode turned on.

The telephoto lens comes with OIS for steadier shots, but be prepared for a lower image quality once you reach 30x zoom. Personally, I’d stop at 5x zoom for an acceptable picture; zooming more will just result in an unsatisfactory shot. The Galaxy A72 has a standard macro lens too; images are clear and colour reproduction doesn’t differ by a lot, but it’s nothing to shout about. This time, the Galaxy A72 has a bigger 5,000mAh battery that promises 2-days battery life. This is certainly true for non-heavy gamers, but if you’re always gaming and watching videos, you may need to charge the phone about one and a half day later. Samsung also maintained 25W fast charging with the Galaxy A72.

Check out our unboxing video below: 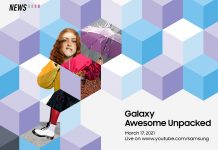