HP has officially announced the debut of AMD Ryzen processors in its gaming PCs — the HP OMEN 15 laptop and the HP OMEN 25L desktop. The laptop also comes with a 15.6-inch FHD display that supports a 144Hz refresh rate. In terms of I/O ports, the OMEN 15 has a USB-C port, three USB-A ports, an RJ-45 port, a Mini DisplayPort and an HDMI 2.0a port. You also get fast charging with this laptop, allowing to charge 50% in 45 minutes. The OMEN 25L is powered by up to AMD Ryzen 7 3900 CPU and can support the latest NIVIDIA GeForce RTX 3060T GPU. However, the motherboard uses a B450 chipset so your options for upgrades down the line are limited. Apart from that, it supports up to 32GB of DDR4 RAM and you can choose to have it with RGB lighting or without. You’ll also get an impressive storage of up to 2TB PCIe SSD storage and 2TB 7200rpm HDD storage.

The HP OMEN 15 and HP OMEN 25L are priced from RM3,899 and RM6,899 and can be found on the official site and its official stores on Shopee and Lazada. 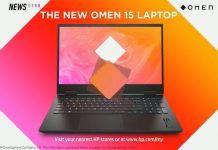 HP OMEN 15 launched in Malaysia: Comes with a 300Hz display