Curved display returns to the next OnePlus phone

The renders of the OnePlus 9 Pro revealed a curved display that with a punch hole screen on the top left. On the front, it resembles the OnePlus 8 series that was released earlier this year, but its rear is more similar to the OnePlus 8T and OnePlus Nord’s when it comes to its camera bump.

OnePlus 9 Pro may have a 144Hz display

Design-wise, the OnePlus 9 Pro doesn’t seem too different as compared to its predecessor. However, there may be some changes in the final OnePlus 9 Pro since nothing is set in stone. You should also expect a 6.7-inch AMOLED display that comes with a 144Hz refresh rate, in addition to a quad-camera setup on the rear.

The OnePlus 9 series will also be sporting a Snapdragon 875 chipset, an IP68 rating and support for 65W wired charging and 40W wireless charging. It is expected to launch earlier than usual on March 2021. 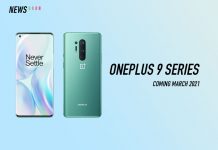