The Jabra Elite 85t has been launched bringing to the country a new premium pair of wireless earbuds with ANC capabilities.

This is the follow up to Elite 75t which was launched early this year. It’s good to note that the Elite 75t gets ANC too via an OTA update. Back to the new earbuds, it comes in a familiar look – a circular frame with exchangeable ear tips, plus buttons on each earbud for controls. The product comes with a semi-open design which allows for a natural hear-through experience, and Jabra claims that they’ve put a lot of recourse into making it fit better for everyone.

Under the hood are 6 microphones, which allow for wind protection and allowing clearer calls. Another four mics are also included for ANC – these work together with a dedicated processor inside the earbuds to help remove external noise. Besides ANC, the Elite 85t also comes with large 12mm drivers to deliver powerful audio and bass. The audio, plus the level of ANC, or hear through can be adjusted using the Jabra Sound+ app.

When it comes to battery life, Jabra promises up to 5.5 hours of usage on a single charge, or 25 hours with the charging case. Speaking of the case, the device also supports Qi wireless charging. Other features include IPX4 durability rating, as well as support for Google Assistant, Alexa, and Siri. The Jabra Elite 85t will be available this December 4 for RM1,049 in Titanium Black – other finishes such as Gold Beige and Grey, will only come in Q1 of 2021. To sweeten the deal, early birds will also be able to get a Jabra Elite 45e (RRP RM379) for free when they buy the Elite 85t during its launch. Visit Jabra’s website here to learn more about the device or here to buy the earbuds. 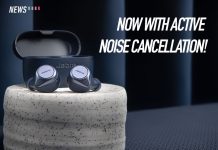