Cyberpunk 2077 has gained lots of attention since it was first announced — even OnePlus has joined in by making a OnePlus 8T Cyberpunk 2077 edition. Even though the game hasn’t been released yet, OnePlus is already set on launching a Cyberpunk 2077 edition of its latest phone, the OnePlus 8T. This phone will be launched in China on November 2, featuring a design that revolves around the theme of the game. OnePlus is also not the first to integrate Cyberpunk 2077 into its phone; vivo previously introduced a Cyberpunk filter in its V20 series. Based on what we’ve seen so far, the OnePlus 8T Cyberpunk 2077 edition will likely be in dark grey/black colour paired with yellow accents. As for its specs, we’re not expecting it to differ too much from the vanilla variant, but perhaps OnePlus will up its RAM and storage.

To recap, the OnePlus 8T has a 48MP quad-camera setup, a 6.5-inch OLED display with a 120Hz refresh rate, and a 4,500mAh battery paired with 65W Warp Charge. For the full specs, check out our previous article. 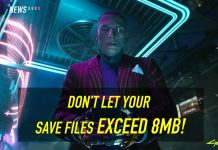