There are two variants in the line-up – the ZBook G7 Studio and the ZBook G7 Create; both devices are 15-inch machines and HP claims that they are the smallest of its class.

The ZBook G7 Studio comes with your choice of a FHD IPS panel or a 4K version which also comes with touch support.

The laptop is built with aluminium, and it has a small frame that is 17.5mm thin and weighs below 1.81KG. There’s a vapor chamber that works with a three-sided venting design that help keep this thin, but powerful laptop cool during heavy workloads.

Speaking for powerful, this laptop can pack up to an Intel Core i9-10885H, or even an Intel Xeon W-10885M for more server applications. For graphics, your top pick would be an NVIDIA Quadro 5000 Max-Q with 16GB of VRAM. In terms of memory and storage, your options include up to 32GB of 2,933 DDR4 RAM and up to 2TB of PCIe NVMe SSD or 512GB of PCIe NVMe SED SSD.

In terms of ports, you get two Thunderbolt ports, one USB 3.1 Type-A port, one HDMI port, an SD card reader, and a 3.5mm headphone jack. Moving on to the G7 Create, it differs from the G7 Studio in that it doesn’t offer an Intel Xeon chip, but you still get a Core-i9 option, and only up to an NVIDIA GeForce RTX 2080 Super for graphics. For storage, you also get up to 4TB of NVMe SSD capacity. More specifically, it’s a Ryzen 5 4500U chip that you’ll be getting, on top of 8GB of on-board RAM and up to 512GB of PCIe NVMe SSD storage.

The laptop comes with a 13.3-inch FHD touch-enable IPS panel, which is protected with Corning Gorilla Glass NBT.

In terms of ports, you get a SuperSpeed Type-C port with support for DP 1.4, two Type A ports and one headphone jack. 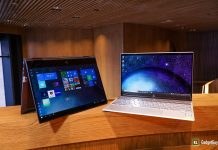 HP Envy 13 and Envy X360: Laptops that are sleek and sturdy, both on the outside and inside.