Acer has decided to celebrate its Acer Day this year online and in conjunction with that, it has refreshed two of its gaming laptops, the Predator Helios 700 and Helios 300. The Predator Helios 700 is now available with a 10th Gen Intel Core i9-10980HJ or an i7-10875H chipset and can be equipped with either the NVIDIA GeForce RTX 2080 SUPER or the RTX 2070 SUPER graphics. It is a 17-inch laptop with a 144Hz FHD IPS display and uses a HyperDrift keyboard. Naturally, this gaming laptop has a powerful cooling system which features the Predator PowerGem thermal solution, five copper heat pipes, Acer CoolBoost technology, vapour chamber and two 4th Gen AeroBlade 3D fans. Apart from that, the Helio 700 has a Full HD webcam pushing 1080p resolution and audio that supports DTS X and Acer TrueHarmony technology. It is a heavy laptop weighing at 4.8kg and starts from RM12,999. The Helios 300 has also been refreshed with either Intel Core i7-10750H or i5-10300H chipset. It uses the NVIDIA GeForce RTX 2060 graphics and also features the AeroBlade 3D Fan for efficient cooling.

It is a smaller laptop featuring a 15.6-inch FHD IPS display with a 144Hz refresh rate. It comes with 8GB RAM which is upgradable up to 32GB and sports 512GB PCIe NVMe SSD. The Helios 300 is much lighter at 2.2 kg and can be purchased from RM4,599. It will be available from August 2 at all Acer official stores and authorised resellers. On the other hand, the pre-order for the Helios 700 starts today. 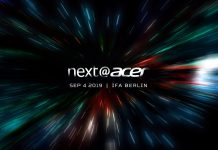