It’s finally happening – Assassin’s Creed with Vikings! We’ve seen almost everything from regular Assassins, to pirates and Greek Spartans – the franchise is finally taking to Scandinavia, which is something fans have been wanting for some time now.

Last night, Ubisoft live streamed the teaser for Assassin’s Creed Valhalla, showing off the game’s official poster; which gives off a History Channel’s Vikings vibe – we see a dude with a braided beard along with a Viking axe, and a Viking ship off to the side.

Newer Assassin’s Creed games have evolved into a hack-and-slash with RPG elements of late with titles such as AC Origins and AC Odyssey – the justification for that has to do with the plot and the timeline; both these games take place before the Assassins Brotherhood was founded, hence before the white cloaks, and hidden daggers.

The original Assassin’s Creed began in 1191, and since the Viking age shortly took place before the Third Crusade, which is when Assassins Creed takes place in, so AC Valhalla will most likely have the same hack-and-slash gameplay. Not much else is known about the game and we also don’t know if it will explore Norse mythology at all; but the reveal trailer will be out tonight at 11pm, so we’ll know more then. It’ll be a tall order to match the excellence of that other Viking-themed game, God of War; but maybe Ubisoft will add their own flare to the game to make Valhalla stand out. 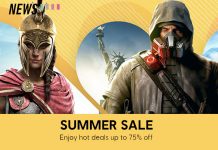