To kick off the second half of 2019, Lazada announced new in-app features like the “GUESS IT” live-streamed gameshow and also “Chup Dulu” pre-order feature. In addition to that, the e-commerce platform has also announced its first mid-year sale event called the Lazada Mid-Year Festival.

Lazada’s Mid-Year Festival will start on July 12 alongside its Big Baby Fair that will last for five days till July 16. The festival will include deals up to 50% on its site and will only last for 24 hours. Lazada also offers to compensate double the price difference if their customers found “lower regular selling price on an identical, in-stock, non-promotional product on another online store”. Apart from that, Lazada also has an ongoing live-streamed gameshow that has begun from the beginning on this month and will last till July 12. Every session comes with six rounds of Guesses in which those with guesses closest to the product’s price will be the selected winners. The higher number of viewers in the livestream will lead to bigger rewards, and users will get a Guess card when they share the livestream link with their friends. In addition to that, Lazada also has its Chup Dulu preorder feature that lets users reserve exclusive deals on selected products. Users will only need to pay an amount of non-refundable deposit to reserve before July 11 and the rest of the payment can be paid on July 12 for the product to be shipped.

Foodies and travelers will also be glad to discover that they can get a 5-inch Whopper at RM5 if they scan the Lazada QR code in participating Burger King outlets, and they can also get 15% off on Malaysia Airlines flight tickets. 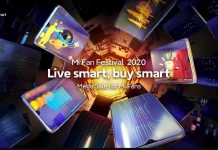