We’ve been seeing a lot innovations in the smartphone sector, both in hardware and software. Perhaps its time to take a break from smartphones and turn our attentions to cameras.

Sony has announced that they’re working on a memory card that’s so fast it could even match SARA SSD speeds. The upcoming CFexpress memory cards are capable of write and read speeds of 1,700 and 1,480 MB/s respectively.

According to Engadget, CFexpress utilizes PCIe Gen technology paired with a arge CompactFlash format. However, regular cameras haven’t quite caught up with CFexpress’ speeds yet unless you’re shooting RAW. The memory cards will be available with 128GB of storage at the moment while 256GB and 512GB configurations are in the pipelines. 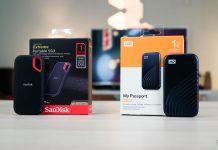 WD My Passport SSD vs Sandisk Extreme Portable SSD – Which one should you get?