Heading into 2019, TM unifi aims to up the ante with a new level of customer engagement. The #khabarbaik campaign is an attempt to be inclusive, bringing affordable mobile data plans to the masses.

During the launch of the campaign, Acting Executive Vice President Moharmustaqeem Mohammed said that the #khabarbaik movement starts with the previously announced lineup of affordable mobile plans. In conjunction with the Lunar New Year, unifi will also be handing out red packets containing goodies at their events across the country, as well as TMpoint outlets and at unifi.com.my. 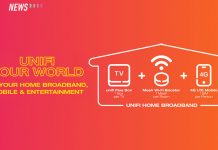 Unifi Your World: Home fibre, mobile internet and TV box in one package