Since iPhone has updated to iOS 12, many has express their frustration towards the changes the iOS 12 has brought. Now with the new Apple iOS 12.1.1 update, it will come with new improvements and fixes for some of the Apple’s iOS 12 controversial changes.

One of the controversial changes from the iOS 12 is FaceTime, which faced a lot of criticism from users for removing features such as the ability to take Live photos during calls and making the “Flip camera” button harder to find behind a menu, but now, all of these problems has been tweaked. Apple has made the button returned to the main screen, which is located on the bottom menu row alongside the Mute, Effects and End Call button.

Other than that, other features include dual SIM with eSIM support for additional carriers on iPhone XR, iPhone XS, iPhone XS Max and a notification preview using haptic touch on iPhone XR.

Besides that, bugs like issues with visual voicemail downloading, Face ID being temporarily unavailable and broken predictive text suggestions on Chinese and Japanese keyboards have also been fixed.

You can read the full list of changes in Apple’s support by clicking here. 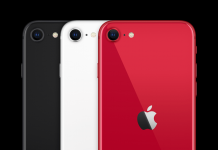 iPhone SE officially in Malaysia from May 11 onwards