HONOR launched its Fansgiving campaign in conjunction with Thanksgiving and with this campaign, HONOR plans to gift their fans with promotions and deals.

Besides sharing their supporters’ messages on HONOR’s social media sites, HONOR is also having a Fansgiving promotion on three smartphones which are the HONOR 10, the HONOR 9 Lite and the HONOR 7X. From 26 November to 28 November, customers can purchase the HONOR 10 which originally costs RM1,399 at RM1,269 in addition to getting a RM50 Hihonor Voucher and also a free HONOR 10 flip cover. The HONOR 9 Lite and the Honor 7X can also be purchased at lower prices which are RM599 and RM679 respectively and purchasers are also entitled to a RM30 Hihonor voucher. HONOR is also organising a Spin and Win Contest that lasts for 8 days from 21 to 28 November at their official website. Those who join might win prizes such as discount vouchers, Touch N’ Go credits and even the HONOR Play Player Edition in Red. Speaking of which, HONOR finally launched the red edition in Malaysia and to show their gratification towards their loyal supporters, they will be giving out a free unit of the HONOR Play Player Edition in Red x Audi Sports LMS gift box when their Facebook page hits 700,000 fans. To join the giveaway, make sure you like HONOR Malaysia’s Facebook page, share the specific post, tag three friends and use the hashtag #700KHONORFans and HONOR will then pick a winner on 1 December.

Some specifications of the HONOR Play Player Edition include its 6.3-inch Fullview display and support for face and fingerprint unlock. It also comes with a 16+2MP dual rear camera and a 16MP from camera, and it is powered by the Kirin 970 processor with 4GB RAM and 64GB storage. The battery capacity is rather large as the smartphone comes with a 3750mAh battery.

This means HONOR will be giving out two HONOR Play Player Edition during this period, so if you’re interested in getting this phone, go to the website https://www.hihonor.com/my/honor-fansgiving.html and you’ll see one tab labelled “Spin and Win” and another tab labelled “Like and Win” to get more information and to join the contest and giveaway. 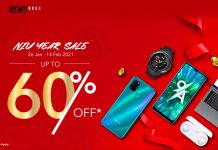