A new smartphone brand has emerged in Malaysian market and it’s Realme, a brand that is affiliated with OPPO. With the official launch in Malaysia, Realme introduces their three newest smartphones; the Realme 2, Realme 2 Pro and Realme C1. The Realme 2 comes with a 6.2-inch super-view full screen, with slim bezels and a slightly thicker chin. It has a unique diamond-like design on its back where there is also the fingerprint scanner and on its front it has a notch that houses the front camera that supports facial unlock. The phone is powered by Snapdragon 450 processor with either 3/4GB RAM and 32/64GB storage. The phone is shipped with ColorOS 5.1 based on Android 8.1 and has 4230mAh battery. Camera wise, the Realme 2 comes with a 8MP front camera with f/2.2 aperture and the rear holds a dual camera of 13MP and 2MP with f/2.2 and f/2.4 apertures. The camera on the Realme 2 supports AI Beauty, front camera HDR and Bokeh Mode. The Realme 2 Pro is slightly bigger than the Realme 2 whereby it has a 6.3-inch FHD+ display with a dewdrop notch that houses the front camera. It supports dual sim and has a fingerprint sensor on the back that has a transparent glossy visual effect. It runs on a more powerful Snapdragon 660AIE processor compared to the Realme 2, and it has up to 8GB RAM and 128GB storage. The smartphone comes with a 3500mAh battery but the cameras are better as the phone has a 16MP front camera with f/2.0 aperture and dual 16MP and 2MP rear cameras with f/1.7 aperture that supports 4K video recording and has five modes of Portrait Lighting. Realme also collaborated with Shopee and Lazada, whereby the Realme 2 Pro will be sold exclusively on Shopee in relevance with the Shopee’s 11.11 Big Sale with special prices from RM 799 and the Realme C1 will be sold on exclusively on Lazada from 22 November to 22 December for RM 399. On the other hand, the Realme 2 will be available from 24 November onwards at selected retail stores such as Vivid, Mobile to go, Seven mobile and DirectD. 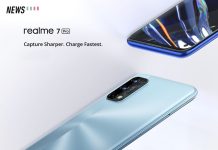 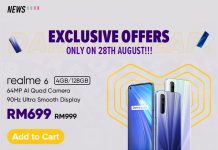