COMPUTEX is a place where you tend to easily find gimmicky PC peripherals and components, while this year is no different, with manufacturers showing off pretty much RGB in every products, GAMDIAS has managed to capture my attention with their latest Hades P1 Wireless Gaming Mouse, which was placed on a NYX P2 mouse pad that sports a wireless charging pad at the top right corner, while I was simply fiddling with the mouse and started to click on it, GAMDIAS’ marketing manager came forward and told me that the Hades P1 can be recharged by simply placing it on the Qi-compatible wireless charging pad. I placed the mouse on the wireless charging pad, and the LED on the middle button turns into red instantly to indicate that it is charging, I then placed my Mi MIX 2s on the top, it started charging too without a doubt. I was awed, and exclaimed that I’m so going to get these two when it gets released, simply because I can finally do with a wireless mouse that does wireless charging, without forgetting the fact that I could also use that wireless charging feature to charge my iPhone X. That alone, the GAMDIAS Hades P1 is by all means a very practical gaming mouse, there’s the usual RGB treatment that can be customized by the company’s Hera software, it features an advanced optical gaming sensor that can go up to a resolution of 12000 DPI, it also supports charging via a MicroUSB port and can still be used while charging, the side panels are magnetic which you can attach grips on to it. GAMDIAS told me that both the Hades P1 and NYX P2 will be sold separately, but there are plans to introduce both as a bundle when it goes on sale officially. 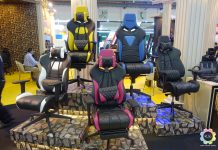 The Gamdias Achilles is a gaming chair with RGB lighting 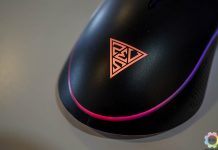