There is another manufacturer that is joining the notch party and this time its Honor. Recently a leaked image appeared in China on the upcoming Honor 10 phone which shows a notch on the top which is smaller than the iPhone’s.

The device is a prototype and has a case covering most of the phone except the front and the rear camera. Although the screen covers most of the phone, Honor has managed to include a fingerprint sensor and touch buttons on the bottom front of the phone. However, due to the phone enclosed in a case, we are not sure if it comes with a 3.5mm jack, but it looks like to have a USB Type-C port and dual cameras which we have seen in the previous Honor 8 Pro. These images should be taken with a grain of salt, the final product might not look the same but one thing for sure, it will come with a notch. 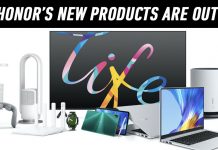