Samsung has just unveiled their own smartboard called Flip during CES 2018. The Flip is Samsung’s answer to Google’s Jamboard and Microsoft’s Surface Hub which allows companies to perform collaborative work and use it as a display for other devices.

The Flip can be used in landscape or portrait mode and comes with a height-adjustable stand making it perfect for meeting rooms or collaborative spaces. It has a 4K display and comes with wireless connectivity, USB, PC and mobile ports allowing almost any device to connect to the display. This will allow you to share contents on your devices to the screen, four people can draw on the screen at the same time using a stylus or with their fingers and there is a meeting software to manage and store meeting content in a central database. 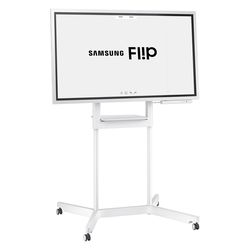 Samsung has not revealed the operating system powering the Flip or pricing during their unveiling, but an assumption would be that it would be priced around the same as Google’s and Microsoft’s smartboards as they both have 55-inch screens and are made for the same reasons as the Flip