A few years back, my father bought a robot vacuum cleaner for the household, it was cute, helpful and the family loved it, however during that time such consumer electronics aren’t that smart, it had poor battery life where it needs to be recharged in 30 minutes, it also requires a lot of supervision as it occasionally gets stuck in tight corners. Today, robot vacuum cleaners are a lot more capable than it used to be back then, some can be controlled over the cloud, packed with advanced sensors for smarter cleaning, and they are no longer expensive to own. A few days ago, we received the ECOVACS DEEBOT M81 Pro for our review, though it doesn’t look any different from any other robot vacuum cleaners I have come across, it has some pretty interesting features that I was eager to find out, and here are my thoughts about it. The M81 Pro has built-in WiFi that is mainly used for controlling its operation via the ECOVACS smartphone app, which is available as a free download for Android and iOS devices. The pairing process can be initiated by holding on to the WiFi button on the remote, where the vacuum cleaner will give a beep with the WiFi indicator flashing, then follow the instructions on the app to have it connect to your home WiFi network. One interesting fact here is that the D81 Pro can be controlled over the cloud, though it doesn’t have a mapping feature due to the lack of an ultrasonic sensor, you are still able to see its battery level, set a schedule for it to start cleaning, and have it return to the charging station. Unlike other robot vacuum cleaners in the same range, the D81 Pro has a small reservoir for its mopping feature, where it dispenses water together with the provided mopping cloth while vacuuming the floor, as most vacuum cleaners still tend to leave some dust as they clean, this is an extremely useful feature as it ensures a cleaner floor, the reservoir can be refilled by opening the flap at the back.

The Deebot M81 Pro performs fairly well during my test, I had it clean the living area of my landed house and while I was impressed with how well it was able to squeeze through tight corners, there were times where the robot got under my couch or accidentally running through room slippers on my floor. As for carpets, the robot’s thick wheel was able to go across it without any issues, which is certainly an improvement from what I have seen on my previous robot vacuum cleaner. Probably the most impressive part of the M81 Pro, is how ECOVACS has managed to make a really efficient vacuum system without making much noise, the company rates the maximum noise level at 57dB, which you can definitely still hear your music playback and not have someone yelling at you while it is working. In terms of battery life, the Deebot M81 Pro was able to last up to 3 hours continuously, which is rather decent and should technically last two times of casual use, the robot will automatically return to the charging station once the battery is low, however if it travels too far away from it, you may have to manually transport it back to the charging station due to its limited IR sensor. Overall, the DEEBOT M81 Pro is a pretty decent robot vacuum cleaner with floor mopping features that doesn’t break the bank, it doesn’t require much human intervention as it is able to work its way through tight corners really smart with its soft bumper and IR sensor, the added feature of being able to control it using an app is also rather commendable, considering that the provided remote control has the most chances of getting misplaced than a smartphone. The DEEBOT M81 Pro retails at RM1,499, and for a limited time, ECOVACS is giving away 3 units of the DEEBOT M81 Pro on its Facebook page, so do head on over to try your luck as you may stand a chance to win one this month.

To purchase and find out more info about ECOVACS products, you can head on over to Ban Leong’s website. iRobot’s Roomba robot vacuums may have arms in the future 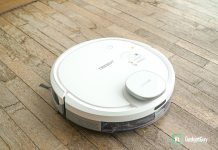 ECOVACS DEEBOT OZMO 900: The Terminator of Dust and Dirt 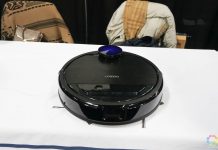