ASUS’ flagship smartphones were not given the full screen display treatment. In fact, the ASUS Pegasus 4S is the company’s first ever smartphone that features an 18:9 display, something which has become a norm among flagship smartphones and mid rangers. The ZenFone Max Plus follows suit with the same display aspect ratio, along with a list of respectable specs.

First off, the ZenFone Max Plus comes housed in an aluminium chassis, featuring design element that is similar to that of the Pegasus 4S. On the front is the 18:9 display measuring at 5.7-inches in Full HD+ resolution. The phone however still sports rather large bezels for a full screen display smartphone. Underneath the hood lies a MediaTek MT6750T processor with two storage and memory variants – 2GB RAM/16GB and 3GB RAM/32GB.

The handset packs a dual rear camera setup consisting of 16MP + 8MP sensors, plus an 8MP selfie camera on the front. The fingerprint sensor has been mounted on the rear panel as well for more screen real estate on the front. The ZenFone Max Plus has a large 4,130mAh battery, which sounds more than sufficient on paper. It comes with an older Android 7.0 Nougat software however, instead of Android Oreo. The ZenFone Max Plus was spotted on the company’s Russian website, but there happens to be no news regarding its availability or pricing just yet. Stay tuned for more updates of this phone! 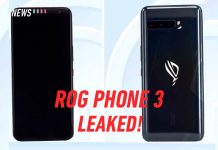