Back in CES this year, our video edits were made possible by the MSI GS73VR we reviewed last year, it is a 17-inch slim gaming laptop that weighs merely 2.3kg that features a Core i7 processor and a GTX 1060 graphics chip, which is impressive for its standards, I still transport it around if I require to do video edits out of the office. Recently, MSI passed over the GS63VR for my review, which is the smaller sibling of my GS73 with a 15.6-inch display, and the model I received doesn’t just come with some marginal upgrades, as it comes equipped with a GeForce GTX 1070 Max-Q edition graphics chip, alongside with an Intel Kaby Lake Core i7 processor, is this the ultimate gaming machine and productivity workhorse on the go? Let’s find out.

I released a video review of the GS63VR three weeks back, and my impressions of it hasn’t changed, it is still an extremely lightweight device that I have been transporting around for work, and it isn’t just for my video editing assignment, but also for my usual writing work. Weighing in at 1.8kg, the GS63VR is on par with the Dell XPS 15 and the 15-inch MacBook Pro, and it packs a set of powerful hardware that rivals the other two, such as the Core i7-7700HQ processor, 32GB of DDR4-2400 RAM, a 512GB PCIe solid state drive and 2TB hard drive, and a silky smooth 120Hz Full HD display. Not to forget to mention, the GS63VR is also lighter than the HP Omen 15 and ASUS ROG Zephyrus, it sure is the lightest gaming laptop of the same class.

MSI hasn’t compromised on the laptop’s build quality as well, it is built entirely in an aluminium chassis like most of its laptops, the display hinges are also stronger than the Skylake model of the GS63VR, which you can easily lift the display up without toppling the machine over. What I really like about this machine is that MSI included a suede leather material at the bottom, which is pretty comfortable if you want to use the laptop on your, though I won’t recommend that when you are gaming, as the heat could burn your legs like most gaming laptops.

Otherwise, nothing much has changed from other GS models, you still get the same amount of ports, including three USB 3.0, one USB-C 3.1 with Thunderbolt 3 support, HDMI and Mini DisplayPort display inputs, a Killer Gigabit Ethernet port, and a SD card reader. The speaker system on the GS63VR hasn’t changed, it can sound loud but definitely not one you will want to use for entertainment, I am however impressed that the machine is Hi-Res audio certified with the ESS Sabre DAC, which produces great audio quality through headphones. The GS63VR uses a TN display panel to achieve its 3ms response time and 120Hz refresh rate, it covers 94% of the NTSC color space, which is decent enough for content consumption, viewing angles are also great as well if have pals sitting next to you to watch you game. I won’t recommend the panel for color grading tasks, as you won’t be able to get accurate colours out of it, however it will do well for the casual photo editing tasks like tuning highlights and contrast. Having the GS63VR as my daily driver for a month has given me the opportunity to game on the go, I must admit that I have tons of purchased Steam games which I barely had the chance to finish, simply because I wasn’t at my desk all the time and always on the move with my trusty MacBook. Despite how lightweight my GS73VR is, its large footprint has been an issue when I only had a Starbucks coffee table to work on, which is why the GS63VR comes into place and has easily become my favorite gaming laptop.

Best of all, the trackpad has decent tracking performance despite an ELAN model, the keyboard also has good key travel and an extremely tactile feedback that I find it improved over the previous model. However, things aren’t exactly perfect on the laptop’s working area, as the trackpad isn’t resistant to accidental palm contact, at times causing my documents to go haywire though it can be easily fixed with a Ctrl + Z shortcut. Furthermore, the USB 3.0 ports placement isn’t going to give way to thicker USB devices (i.e. USB modem dongles, thick flash drives), if you already have a USB device plugged in. MSI’s Cooler Boost Trinity cooling solution has been an impressive cooling system for the GS series, it comprises of three fans with whirlwind blades and five heat pipes to dissipate heat from the CPU and GPU. Despite being a Max-Q design laptop, MSI hasn’t made any changes to further improve the laptop’s airflow intake, though I would assume that the design is already sufficient, the laptop’s CPU can unfortunately get pretty high temperatures when under load, I recorded a maximum temperature of 97°C when playing GTA V in an air-conditioned room, the GPU’s temperature is however reasonable at 81°C. Fan noise is reasonable, and if you can compromise performance a little, NVIDIA’s Whisper mode will be able to turn the fan noise down to 40dB or less. Battery life hasn’t changed from the previous GS63VR, as I am still getting 2 hours and 45 minutes of usability in a single charge, it is something that I wished MSI could have seriously improved on, even if it takes to add on feel extra grams to the laptop’s weight, an extra two hours of power extension would be great enough to not carry the power brick in the bag. Nonetheless, I’m thankful that the GS63VR’s power adapter isn’t heavy to transport around. With our usual gaming benchmarks, the MSI GS63VR with GTX 1070 Max Q managed to score impressive frame rates considering it has a lower clock speed than the standard GTX 1070, we are also seeing a 20-30 FPS difference when compared to the desktop GTX 1070 Ti Founders Edition, which is surprising results. All thanks to the faster clock speed and RAM frequency, the GS63VR was able to produce a performance boost of 18% than the GS73VR, which boasts a Intel Skylake processor and GTX 1060. Here we go again, another significant performance boost from the Skylake GS73VR, definitely better than a GTX 1060. The GS63VR I received comes with a Toshiba 512GB PCIe solid state drive and a Seagate Barracuda 2TB hard drive, data transfer speeds are pretty decent, while I’d hope MSI could have provided a SSHD for the secondary storage, it still has pretty decent read speeds for large files. The Max-Q GS63VR is an impressive slim gaming laptop despite of its shortcomings, the hardware package and portability are something that many other gaming laptops still do not offer as of today, and this is a dream portable machine for gamers and professionals who wants great computing performance on the move. If you are not thinking to purchase the Max Q GS63VR, MSI also offers it in GTX 1060 and GTX 1050 models, but do also expect a smaller amount of storage and a standard 60Hz refresh rate display for the base model. The Good

Visit the MSI Store at Lazada if you are interested to find out more. 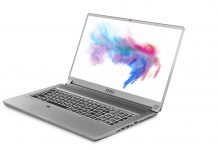 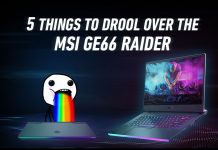 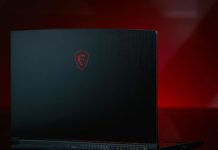 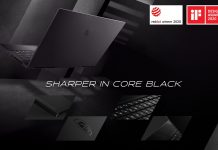 Curious, how heavy is it compared with MBP 2011? Weight including the brick.
Been tempting to get one, maybe during 12.12 sale or black friday.

According to the specs sheet, this is definitely lighter than the MBP 2011.