Perodua has today officially unveiled the third generation of its best selling hatchback, the Myvi goes on sale at all Perodua showrooms nationwide today and has also officially received a 5-star ASEAN NCAP safety rating for all of the variants, making it the best value for money cars in its range on top of its already attractive features.

Available in 1.3 and 1.5-litre Dual VVT-i engine variants, the Myvi is Energy Efficient Vehicle (EEV) certified and is built at Perodua’s plant in Negeri Sembilan, paired to the same 4-speed automatic and five speed manual transmission for the base model. In terms of fuel efficiency, Perodua claims that it is able to achieve fuel economy of between 20.1 and 21.1 km/l, which is on average 32% more efficient than the previous model. The Myvi is 205mm longer, 30mm lower and 70mm wider, with a 60mm longer wheelbase than the previous model, which leads to more legroom and 277 litres of luggage space. Perodua mentions that the new Myvi is still based on the previous platform however it now has a reinforced structure to meet the highest safety standards, the company plays a major role in designing the upper body of the car. Aerodynamics of the Myvi is also improved with a lower height, air spats, semi-flush rear spoiler and aeroslim wipers that contributes to a drag coefficient of 0.296, while cabin noise and vibration is also much reduced with the use of acoustic windshield.

Safety features such as ABS, EBD and VSC comes as a standard for all variants, while four airbags are provided in the 1.3 litre model and six airbags are provided in the 1.5 litre model. The 1.5 Advance variant comes with the additional A.S.A (advanced safety assist) system comprising of a forward facing stereo camera system, which assists drivers to be safer on the road with features such as Pre-Collision Warning, Pre-Collision Braking, Front Departure Alert and Pedal Misoperation Control. In other features, all variants will come with LED headlamps with follow-me-home function and headline levelling, Smart Entry with Push Start and digital air-cond controls. The 1.5 High and 1.5 Advance has a built-in smart tag toll reader, which drivers will only need to insert their Touch N Go cards at the right bottom of the driving panel, a sensor right on top of the dashboard will then process the payment when passing a SmartTAG lane. The 1.5 Advance will also have a 7-inch touch screen multimedia system with Air Mirroring feature for Android phones.

Perodua also offers the GearUp accessories package for the new Myvi, which customers can choose from RM320 (Pen. Malaysia)/RM326.60 (East Malaysia) onwards to jazz up their Myvi with a more sporty look. 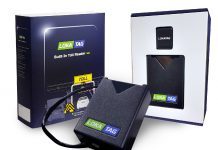 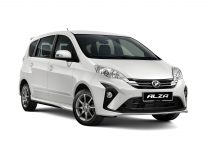 The Perodua Alza gets an updated design for 2018, prices from RM51k to RM62K