Social media apps are often addictive, but are also known to be quite data consuming as well. Not only that, these apps require a decently fast network speed for their content to load. Facebook has a Lite version for its app and also the Messenger app, whereas Twitter will be rolling out a lightweight version of its app too.

According to TechCrunch, a Twitter spokesperson has claimed that the company is currently testing Twitter Lite in the Philippines, in hopes to increase the availability of Twitter in the country. The spokesperson further claimed that the Philippines has slow mobile network and expensive data plans, hence Twitter Lite will help to overcome the barriers regarding the usage of Twitter.

It has been proven that lightweight versions of apps can cater to markets in developing countries where 3G and LTE networks aren’t plentiful. Twitter Lite users have an option to switch to a media-free mode, which will consume less data than usual.

Twitter Lite is currently only available in the Philippines, but we’re almost certain that the app will be rolling out to other similar countries in the future. 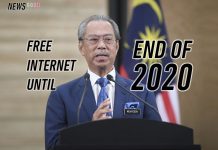 PENJANA: Malaysians to receive 1GB FREE INTERNET until end of the year