The air in Berjaya Times Square had a sense of intensity as it is hosting GamePlan Game and Anime Expo, a gathering of gamers playing console, PC and even mobile that will be duking it out in games like Overwatch, Street Fighter, FIFA and Mobile Legends. As the official media partner, you can bet that we were there to have a taste of the action and atmosphere. If you are a gamer that enjoys watching tournaments of the mentioned games, then pick up your phone and wallet and head over here for a weekend of intense gaming. Walk on in from the front entrance of Times Square and you will be greeted with the first playing area that will host the Mobile Legends tournament. Powerbanks and smartphones were scattered all around waiting to have their owners play what will probably be the most intense match of Mobile Legends they will ever play. Nice and comfortable bean bags were placed to give the participants the best experience for the game. Honor who is sponsoring the Mobile Legends is also there promoting their phones and overseeing the matches. Alongside them is Armageddon gaming products ready to be purchased for those that want to. Going down a floor and that’s where the bigger action is happening with tournaments like Overwatch and Street Fighter is taking place on big screens with all the seats for the audience filled up supporting their favourite teams. Shoutings and order giving were heard from the Overwatch side with team captains rapidly giving orders to their teammates in order to get the payload to its destination in one of the most entertaining matches in the game that I have ever seen. Players faces were in full focus mode as they processed all the mayhem that was happening. Right across from that was the Street Fighter match that had players from Thailand, China, Taiwan and even the US. However, unlike the Overwatch side, players here were dead silent with focus so sharp that they zoned out all other distractions even advice from their own group members. You have probably heard the term “the comeback is real” and let me tell you that is not an understatement as some players managed to win the game with HP so low that a breeze would probably KO the character. Other than that, on the side, there was a group of people playing games like King of Fighters and FIFA in a friendly match for both the tournament players and regular players alike. These players although playing a casual match, were in a state of focus to proof that a casual player can also master the game. There is also a VR section where MSI was promoting their VR Ready gaming laptop that was hooked up to the HTC Vive. I got a chance to test out the system in VR and I have to say, it’s pretty impressive something as portable as the gaming laptop was able to work flawlessly with the VR headset and graphics was also very decent to play games in. If VR is not your thing, there is also a dedicated area where people were playing racing simulators on driving wheels with three screens to give the best possible immersion. Although there is a small following for it, there was still a line for those that wanted to try out the simulator. There are also other products like laptops, speakers and a visitor from the Indonesia selling his anime artwork to those that are the ultimate Otaku which look very impressive and the prices are also very reasonable.

If you have nothing to do for your weekend and want to see some gaming action taking place then make your way over to Berjaya Times Square and spend your time watching professional gamers going head to head to be crowned the champions of their respective games, after all, it is a free event! 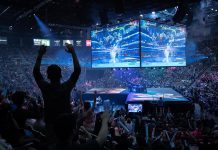