With the rising trend of virtual reality and high resolution content, people have long forgotten the existence of 3D content. Sure, 3D is still pretty relevant when it comes to movies, but what if you want to create your own content in 3D while you are travelling or create a tutorial on some life hacks? Taiwanese startup Weeview thinks that there’s a demand for such a device and therefore created SID, an action camera that will let you tell your stories in 3D.

I happen to visit the company’s booth during my visit to the InnoVEX hall, which is part of the Computex exhibition area featuring startups from around the world. The company’s Chief Technology Officer mentioned to me that they were committed in promoting 3D as a new way of telling life’s stories, some content creators will want their audience to experience the scenes they are in, which is why SID is perfect to achieve such purposes. During my time at the booth, I was shown a demo shot by the camera in a pair of cardboard goggles, it was a video of a female gym instructor showing her moves, I was impressed with how crisp it looked and I don’t feel dizzy at all. SID features two cameras that takes up to 32-megapixel stills and 3K (2880×1440) videos, there’s no display on the hardware, hence you will require to pair it with your iOS or Android device to use it as a live view, the hardware itself is also designed to fit with GoPro mounts, and the company recommends using a handheld stabilizer when shooting on it. Probably the most impressive part of the camera is the support of 3D Live Streaming, users can stream their surroundings in 3D to Facebook Live and YouTube, have their audiences put on a pair of 3D goggles to experience the stream in 3D. Under the Radar: Reduce the risk of coronavirus with these devices 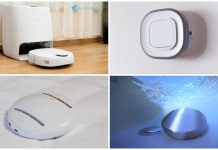 Under the Radar: Devices that will keep every nook and cranny of your home clean