It’s hard to review an entry level phone when you’re so used to its flagship counterpart. Such is the case when it comes to the Samsung Galaxy J5 and J7. I had to constantly remind myself that these phones are not a part of the S series, and as such, I shouldn’t expect them to be blowing my mind at every nook and cranny. Before I get ahead of myself, let’s just take a look at both the J5 and J7. One glance at the J5 and J7 is enough proof that these two devices are part of the Samsung Galaxy series of smartphones. Both of them sport a look that is almost similar to the modern day non-Edge smartphones that Samsung has been churning out as of late. Size-wise, the J7 is slightly bigger than the J5, with the former coming with a 5.5″ Super AMOLED touchscreen, while the latter sports a 5.0″ Super AMOLED touchscreen instead.

Unlike the more premium phones in Samsung’s line-up, the J5 and J7 aren’t unibody phones. You are able to pry open the back covers of both the J5 and J7, allowing you to install both the phone’s battery and SIM card into these phones. As for the premium factor, while they both cannot compete with the flagship level S series, the J5 and J7 are reasonably attractive phones that put quite a few other entry-level phones to shame in the looks department. Aside from the size of the phones, the J5 and J7 comes with seperate configurations of their own. First off, the J5. The J5 is a powered by the Qualcomm Snapdragon 410 and 1.5GB of RAM. For storage, the J5 comes with 8GB of internal storage that is upgradable to 256GB through microSD cards. The J5 comes with a removable Li-Ion 2600 mAH battery. The specifications of the J5 firmly puts the device in the upper end of the entry level spectrum.

Moving on, the J7 is meatier device, as it comes with a Snapdragon 615 and 1.5GB of RAM. The storage space of the J7 is significantly larger as well, as it has 16GB of internal storage to work with. Much like the J5, you can also expand the storage of the phone to up to 256GB via miroSD cards. The battery for the J7 is bigger as well, as the phone comes with a removable Li-Ion 3000 mAh battery.

Both the J5 and J7 sport the same camera, with the rear camera being a 13MP shooter that has a f/1.9 aperture and 28mm lens that comes with autofocus and LED flash. The front camera is a 5MP shooter with f/2.2 aperture and 23mm lens with LED flash. Both phones run on Android 6.0.1 Marshmallow with Samsung’s on TouchWiz UI skin. One of the new features that is unique to the J5 and J7 is something called an Ultra Data Saving mode. When activated, this mode will cause the phone to compress data to make data transfer as efficient as possible. It also shuts off prevents any data from being used by background applications, allowing you to conserve your precious data.

In theory, this would be a great feature that would help you ration your data carefully. In practice, the usefulness of this feature will vary depending on your mobile browsing habits. I’ll elaborate on that a little later. If you’ve ever used a Samsung smartphone before, you’ll be able to find your way around the J5 and J7 within seconds as the whole Samsung experience hasn’t really changed all that much since the S6. That said, you should remember that both the J5 and the J7 are not flagship-level devices, and as such, be prepared to face some stutter when you start multitasking with it.

The J5 bares the brunt of the lag issues, mostly because the device itself isn’t really that powerful. Some simple multi-tasking on the J5 is enough to tax the phone, and if you’re playing an intensive game on it, you’ll soon find out that the J5 will struggle with it as well. While the performance of the J7 isn’t as bad, it is still a device with its limitations. Multi-tasking will still bring the device to its knees, and intensive games will still cause the device to choke rather frequently.

However, if all you’re doing on the J5 and J7 are the bare basics (i.e. web surfing, mail checking, etc.), you’ll find that both phones are perfectly competant to handle it. Where the Samsung S series sports one of the best cameras available on any smartphone, the J5 and J7 cameras are much more…price appropriate when you compare the price point between the J and the S series.

As far as image quality goes, both the J5 and J7 can produce reasonably good photos with decent detail and accurate colours under the right conditions. That said, the images taken can be noise filled, particularly in low-light environments.

The J5 and J7 also comes with a Pro mode, although the feature pales in comparison to the flagship level Samsung phones. The modes you’ll get under Pro mode is limited to white balance, ISO and Exposure compensation.

To summarise, the cameras on the J5 and J7 will get the job done. Just don’t go in expecting S-series quality. 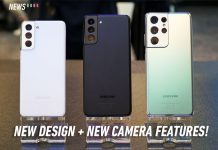