If you haven’t had the chance to own a NES console or probably missed that era, Nintendo is bringing the NES back to the present as it has announced the $60 NES Classic Edition console. Nope, you are not getting the monstrous sized NES back then but this one is a rather cute and small one, but it does look like the NES. With that said, this mini-sized NES has HDMI output and comes with a NES controller that works specifically with the device, unfortunately you can’t insert your old NES cartridges into this antique but modern gaming console or even sideload games, but you will definitely appreciate the multiple suspend point feature so that you do not need to remember those passwords to continue playing a game.

Here are the games that will be included in the NES Classic Edition:

Interested already? Just make sure you have $59.99 ready when it gets released on November 11th this year. 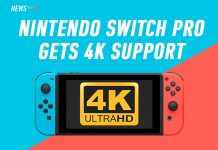 Nintendo Switch Pro to launch in 2021 with 4K support