The MSI GS40 Phantom. Small in stature, but big in specs. However, does it live up to its offerings? If you look at all the gaming notebooks in the market, you can hardly find one that is smaller than a 15-inch, which can offer the same performance specs. The MSI GS40 Phantom, however, sports an NVIDIA GeForce GTX 970M, which is quite a daring thing to do, as MSI would need to make tons of effort to ensure it doesn’t overheat on top of supplying enough juice to power it. However, MSI did make a good choice to use an Intel Core i7 6700HQ as this CPU is not as power hungry, so it pairs well with the power hungry GTX 970M. On paper, the MSI GS40 is fitted with an Intel i7 6700HQ and a GTX 970M as mentioned, and sports 16GB DDR4-2133 RAM in dual-channel configuration, 128GB M.2 SSD with 1TB 7200rpm HDD, all on an Intel HM170 Skylake mainboard. We will talk about its performance in a bit. Let’s take a look at the MSI GS40 Phantom’s looks. Just like all its Gaming G series lineup, the GS40 looks very much like the hood of a shiny metallic sports car. The lid and the inner part of the chassis is made of brushed aluminum with a touch of red chrome accents peppered around it, while the rest of the chassis is made of matte plastic. Given how hot the GTX 970M can get, it wouldn’t have been wise to make its entire chassis out of metal. In our unboxing video, we saw the lid being a little on the bouncy side when you open it, but it doesn’t really affect the experience of using the notebook, unless you’re trying to use it in a moving vehicle that is traveling over a stretch of potholed roads. The hinges are pretty steady and there wasn’t any creaking when trying to open the lid. We especially appreciated the fact that MSI included some rubbery nubs around the sides of the screen, so when you’re closing the lid, it doesn’t slam against the keyboard, especially since the lid is rather thin afterall.

Generally, the make of the GS40 is great that despite weighing a mere 1.8kg, it does not feel flimsy, cheap or lacking. Connectivity is important especially with a small notebook such as the GS40. It is quite generous of MSI to offer a variety of ports on this notebook such as a HDMI and mini Display port to connect it to an external screen, as well as 2 USB 3.0 ports, one USB-C port, an SD card reader, microphone and headphone jacks port, and an Ethernet port. Glad they included an Ethernet port for a small notebook unlike other small notebook manufacturers who expect everyone to use wireless connections, or buy additional accessories. Speakers are at the front of the notebook; but don’t expect to use that much as the sound it produces is quite teeny. You would fare better using an external speaker or a good pair of gaming headphones. The MSI GS40 features a SteelSeries keyboard, which is pretty much like what you might find in MSI’s other Gaming series notebooks, sans the numeric keypad. It has a red backlight and being chicklet styled, the feedback is shallow as one would expect. Despite that, key travel is pretty good but if you’re a hard hitter, you might find the keyboard a little bouncy when applying too much pressure. It does bounce quite a bit as well since it looks like the keyboard plate is quite thin. As for the touchpad, it is pretty responsive and precise, and even recognizes gestures even at the edges. For instance, you can scroll on the browser just by gliding your finger up and down the edge of the touchpad.

So whether you’re gaming or doing productivity work, the keyboard and touchpad is decent; heck, we even tried playing games using the touchpad when accidently leaving the mouse behind. It was serviceable, unless you’re trying to headshot everyone in an FPS game, then that would be asking a little too much. The matte IPS display of the GS40 is a 14-inch Full HD panel that offers an all-rounded output of colours, with an option to change colour profiles depending on whether you’re watching a movie, playing a game or using it for work. Using it outdoors is also not a problem, and you can use it in sunny areas without squinting to see what is on the screen. To our pleasant surprise, despite using it at high luminance, the battery power was not particularly affected.

Now, let’s move on to the million dollar question. How is the performance like? With the combination of an Intel i7 skylake processor, 16 GB of RAM in dual configuration and the powerful GTX 970M GPU, it was a rather smooth and uneventful experience. Combined with Windows 10-home edition preloaded into the machine, apps were launched quick and easy with almost no lag.

How about gaming? We tested a few graphic games such as The Witcher 3, Batman Arkham Knight, Rise of the Tomb Raider, and Metal Gear Solid 5, and graphically-wise, there wasn’t any problems even when casting it on an external monitor, or even a projector. We ran The Witcher 3 at high settings and native display resolution without any snags, although it choked a little on Ultra settings. With that, you can expect to be prepared for most games thrown at you this year. The only issue we had was when playing online games, the texts on the chat boxes can be a little too small, given that this here is a 14-inch display. I got kind of squinty eyed when playing Blade and Soul, so I casted it on the wall using a projector instead. As for noise emissions, thankfully the GS40 did not sound like a vacuum cleaner which can prove to be pretty embarrassing if using it outdoors. The fans are quiet when idling, however, at really high speeds, you can hear a high pitch whining noise, usually when using it to game while connected to the charger. It especially does this random loud whining when running on a balanced mode, probably to dissipate heat buildup every now and then.

Heat dissipation is decent, that even playing at full load, palms and fingers do not get scorched although you really shouldn’t play games with it on your lap to avoid burning up precious jewels.

With all this performance, how does the battery hold up? Generally, the GS40 doesn’t consume as much power as many gaming notebooks, and battery life is reasonable, lasting for about 1 hour on maximum load. If you’re just surfing and doing productivity work, it should last even longer, for about 4-5 hours. This is quite good considering the fact that the GS40 comes with pretty powerful specs.

By the way, check out other photos of the MSI GS40 6QE Phantom below: 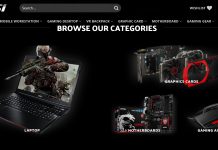 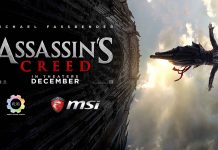 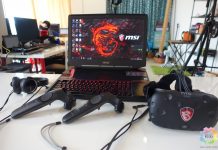