A new SmartPlan was unveiled by Digi today, which is one of the most bang for your buck postpaid plans considering its value for money. The SmartPlan 75, which was announced on Digi’s official website, offers a whopping 7GB worth of internet data. Not only that, subscribers also get unlimited calls to all Malaysian networks for free. This attractive postpaid plan also comes with many other benefits, including free 30GB worth of cloud storage on Capture, free 120 days of subscription to Digi’s Music Freedom app which allows music streaming from selected music apps without internet charges, free 12 months subscription to Malaysia’s own iflix, unlimited Whatsapp and Wechat, along with direct billing for Google’s Play Store. On top of that, you will also have the option to top up 1GB of internet data which lasts for 2 days, if you’re opting for more data. 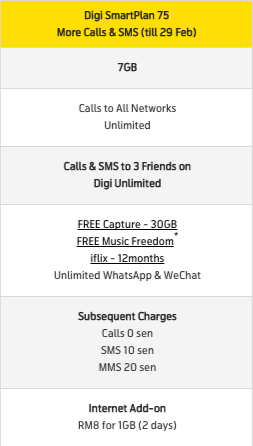 Anyone can sign up for this new SmartPlan, including current Digizens who use prepaid plans or non-contractual postpaid plans, and anyone who intends to switch from other networks. Apart from the SmartPlan75, Digi is also offering SmartPlan 65, 45 and 25 with 5GB, 2GB and 1GB worth of data respectively.

This promotion only stands till 29 February 2015, so grab the opportunity while you’re at it! 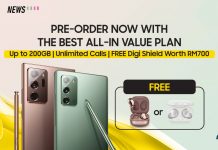