Today, Wikipedia officially turns 15 years old. To celebrate this occasion, the Wikimedia Foundation is starting up a new endowment fund that aims to raise USD 100 million over the course of the next 10 years. For the foreseable future, Wikipedia still intends to carry out donation drives in order to keep advertising off the website. According to Lisa Gruwell, chief advancement officer for the Wikimedia Foundation, the additional funds from the endowment is expected to help insulate Wikipedia from economic turmoil and other potential threats to its survival.

Wikipedia co-founder Jimmy Wales says that the recurring fundraising campaigns and the endowment are needed to run one of the Internet’s busiest websites and realise its ambition to become even more comprehensive as more people get online. “We stay very mission-driven. One of the things that we are focused on is the idea of having an encyclopedia available for every person in the world in their own language. As you go in that direction, these (requests for money) are some of the things you need to do to build that long-term dream,” says Wales.

Source : The Times Of India 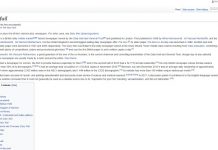