The Secret is a gaming mouse made by a Taiwanese peripheral maker with an animal motive. No, it’s not from Razer; it’s from Ducky, a company that is rather popular for its mechanical keyboards. Wanting to be more than just a great keyboard maker, Ducky has attempted to make their own gaming mouse and the Secret is the result of said attempt. So how does this mouse fair on its own? If I had to describe the Ducky Secret with one word, it would be ‘ordinary’. The Secret, as a whole, has a really basic mouse design. Where other gaming mice would opt to slap on numerous macro keys and make it uniquely shaped, the Ducky Secret goes with the ‘keep it simple, stupid!’ design philosophy. I, for one, couldn’t be happier with this decision. The only one complaint with the mouse that I have is the decision to put the DPI switch at the underside of the mouse, making on-the-fly sensitivity switches quite cumbersome. Besides that though, the mouse’s common design means that I can start using it without having to get used to its shape or size.

Another unique thing about the Ducky Secret is its build material. Instead of using ABS for the build, Ducky has opted to use a plastic called PBT to construct the mouse. This material allows the mouse to be much more durable than other mice and is stain resistant. That said, it is not exactly oil resistant as I noticed that the Secret that is currently being used by me has signs of oil on the buttons. For the buttons on the Secret, Ducky has opted to use 5 Omron microswitches. The decision to use Omron switches for its buttons means that the Secret will be able to last quite a while before it breaks down. The Ducky Secret uses a standard optical sensor where the DPI can be toggled between 400 DPI up to 5000 DPI, which is fairly standard fare for a gaming mouse.

The weight of the mouse can also be configured if you feel the need to. The Secret comes with an 11g weight in the box and if you want to, you can install it by unscrewing the back of the mouse and putting it in. Using the Ducky Secret is very straightforward as it is a simple plug and play affair. There are no special drivers that are required to make it run optimally, and as such, you can just plug it in and start using it. Of course, the lack of drivers means that you won’t be able to customise the mouse buttons for your specific needs, but if you don’t need those in the first place, you won’t mind its absence. As mentioned earlier, the positioning of the DPI toggle also makes on-the-fly switching rather inconvenient.

Apart from that though, the Ducky Secret is a mouse that performs just as well as any of the other more “complex” gaming mice. 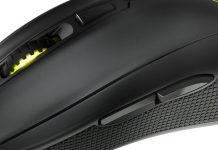