Samsung has been launching one device after another, and now we have the Galaxy Tab S2, a premium tablet from Samsungunlike the cheaper mid-range tablet device – the Galaxy Tab A. If you have seen the previous generation, which is the Galaxy TabS, you can already see quite a bit of changes in terms of looks. For one, Samsung has changed the ratio of the device from wide screen 16:9 to 4:3 ration which is more suited for reading. In fact, you can see that the natural orientation is now in portrait mode by the placement of the buttons in the new Tab S2. Other than button orientation, you will also notice as soon as you pick up the tablet, is how extremely light it is. In fact, it is even lighter than the iPad Air 2 with the Galaxy Tab S2 weighing at 265g for the 7.9-inch version, and 389g for the 9.7-inch version. Not only is is lighter, it is also thinner. The Tab S2 is only 5.6mm thick, which makes it the thinnest tablet to date. Now, the Tab S2 is not made from the latest commonly seen metal and glass unibody, but instead it has a plastic back with chrome metal edges. Don’t be mistaken to think that the plastic makes it look and feel cheap; the patterned texture actually looks and feels premium and the texture makes it easier to grip since it won’t slip out of your hand easily. Samsung also probably made it plastic in order to make the tablet lighter as well, and somehow it feels better than the previous Tab S’s cushion-like back.

On the inside, the Tab S2 has an upgraded processor with an Exynos 5433 and a Mali T760MP6 GPU. It still sports the same 3GB of RAM however, just like its predecessor. As for storage, Samsung has increased the internal storage, offering two options: 32GB or 64GB, and with expandable storage up to 128GB, which we are pretty thankful for. Now, how does the Galaxy Tab S2 fare with regular usage? So far, reading is really comfortable since the tablet feels more comfortable to hold. Since it is lightweight, I can hold it with one hand; even holding the 9.7-inch model is not too bad since my wrist didn’t cramp up even after holding it for quite a while.

As for watching videos and playing games, the Tab S2 did not heat up nor did it crash or hang, which is a pretty good thing. Since the tablet is in 4:3 ratio, the black bars on the top and bottom of the screen when watching wide-screen videos is there but it’s not a really big problem.

With all the stuff you can do with the Tab S2, the next question is, how is the battery life? Well, reading alone doesn’t eat that much battery since too bright a screen – which takes a lot of battery, would give a headache. However, watching videos and playing games tend to drain the juice, so what we did was try doing everything in moderation – reading, videos, games, emails, browsing and whatnots, and battery life could only last about a day and a half at most. Since Samsung made the battery capacity smaller in order to make the tablet thinner, this probably reduced the battery life quite a bit. The thing is, it would be not too big of an issue if there was fast charging, but unfortunately the Tab S2 does not come with that tech and that is a bit of a bummer.

We ran some benchmarks too, and here are the screenshots of four different benchmarks for both the Tab S2 7.9-inch, and the 9.7-inch. 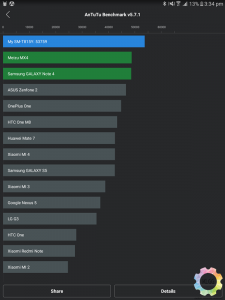 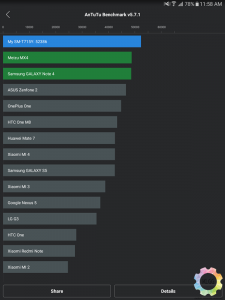 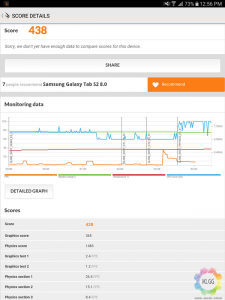 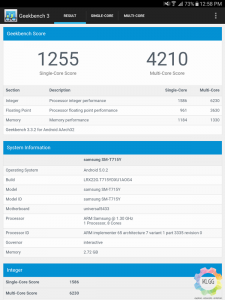 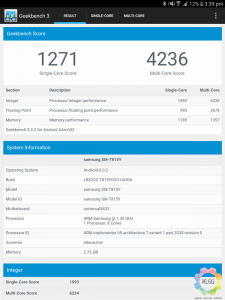 Now, the Samsung Galaxy Tab S2 has also been preloaded with iFlix, and should you buy a unit from Malaysia, you will get one-year subscription for free to watch all the movies and TV series you want. Although Samsung did mention that the Tab S2 is also preloaded with Samsung Milk Music, a radio station of sorts, both the devices we had did not come preloaded and we had to install it via Galaxy Apps to test it out. The Tab S2 also comes preinstalled with Galaxy Life app, and it still sports TouchWiz running on top of Android 5.0 Lollipop, as well as supports the same Multi-Window feature as with most of its latest devices. This is nothing to complain about since mostSamsung users would already be familiar with these additional ware.

The price point for the Galaxy Tab S2 is a little steep, but with the Tab S2 being part of Samsung’s premium tablet series, we would have already expected this kind of price range. The 7.9-inch variant is going for RM1,699 onwards, while the 9.7-inch is at RM1,999 onwards, depending on which storage option you take. In all honesty, the major selling point for the Galaxy Tab S2 is its incredibly light weight and thinness. Of course there are some upgrades, but other than all these, there isn’t really anything really innovative about the Tab S2. However, if you’re looking for a super light and thin Android tablet, or for any tablet at the moment, this is the only one in the market that offers just that.