Xiaomi took the world by storm ever since it came out with its first smartphone – the Mi1, and now it has become the fourth largest smartphone maker in only four years. Anyway, Xiaomi has just launched its Mi Note, and frankly, it is one of the sexiest phones they have made so far, looking and feeling much more premium compared to its other phones.

The Mi Note comes with pretty decent specs, with Qualcomm Snapdragon 801, 3GB of RAM and internal storage of 64GB. Granted it does not come with expandable storage, but none of Xiaomi’s phones comes with microSD support so I suppose since no one expects it to have any, being told that it has 64GB of internal storage compared to its usual 16 or 32GB has already exceeded many of Xiaomi’s fans expectations. Looks-wise, the Mi Note somehow reminds me of the latest Samsung Note 5 that has just been launched recently. Maybe it is because of its curved glass back and metal frame around the phone. Since glass and metal unibody phones seems to be the rage nowadays, I suppose it can’t be helped that very soon, every phone is going to look even more alike. Having said that, I still think the Mi Note looks good and feels very premium-like, with a competitive price of RM1,549.

When it comes to performance, there has been no big issues. The only problem I had was once a while the phone restarted for no reason at all. I suspect it has to do with Xiaomi’s MIUI 6, which comes to the next point.. What I was most surprised is that despite the fact that Android Lollipop has been out for a while now, the Mi Note comes with Android KitKat instead. Due to this dated software, some apps can’t be installed such as Facebook Manager, Singapore Airlines app and a few others that I can’t remember. Another issue I had was with MIUI 6. Although MIUI 7 has finally been launched, it will take a while before we can update our Mi phones to the latest firmware. MIUI 6.6.6 feels clunky and somehow I feel that the reason the phone keeps restarting at times is due to this same MIUI 6. I am still waiting for Xiaomi to rollout the OS and UI update for the Mi Note, or else this pretty phone will just be substandard due to its software.

Like I mentioned in my video, what makes a smartphone “great” nowadays, is how well a camera performs. Some may argue that specs and UI makes a difference, but to everyday users, having a good camera phone is one of the main reasons to purchase that particular device. Having said that, the camera on the Mi Note is actually pretty good. In low-light, it performed decently, although when it is too dark and even when using HHT (Hand Held Twilight) mode, the photo will still be relatively dark. So when it comes to low-light shooting, there still needs to be an adequate amount of light and a steady hand. Honestly, I just rather use HDR Pro mode, unless you are shooting a portrait, then you should just go for the Beautify feature instead. Don’t like your face to be too smooth? You can always switch the Beautify feature at low or off completely. The camera of the Mi Note also launches pretty quickly. Even when running games and other apps in the background, the camera still launches in about one second. However, taking a photo doesn’t seem fast enough. There isn’t a feature where you can opt for sports photography, so the only way to capture moving objects is to go into manual mode. Speaking of manual mode, the manual mode for the Mi Note camera is pretty simplified. You can only have control over ISO, exposure time, white balance and three focus points.

As for the photo quality produced by Mi Note’s camera, I have to say it is pretty decent, and sharp enough to post on social media and used digitally. However, don’t expect it to be of DSLR quality though, since the edges are a little too soft.

Of Battery Life and Benchmarks Battery life. Another important function often overlooked by many smartphone makers. For the Mi Note, battery life was not too bad. Being 3,000mAh in capacity, it can last more than one day even with heavy use. In fact, it lasted almost 36 hours without having to charge, and this is on pretty heavy usage such as playing games, watching videos and the usual interactions via IMs and social media apps.

As for benchmarking, here are the results using Antutu, 3DMark, and GFXBench GL. As you can see, the Xiaomi Mi Note holds itself pretty well compared to other premium phones, just by scores alone. 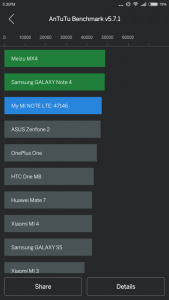