The game features an unshakeable monopoly over Mako energy production, the evil Shinra Electric Power Company holds tight to the reigns of world power. One day, a Mako reactor serving the sprawling metropolis of Midgar is attacked and destroyed in a bombing raid by a revolutionary group calling themselves Avalanche. Cloud Strife, a former member of Shinra’s elite “Soldier”unit takes part in the raid as a mercenary hired by Avalanche and sets events in motion that will draw him and his friends into an epic struggle for the fate of the planet itself. This iOS port includes a virtual on-screen controller that’s specially “designed not to obscure the action.” It offers virtual analog or fixed 4-way digital control pad options and the opacity of the on-screen controls is adjustable. The iOS version of the game has the option to turn off enemy encounters in area maps and a Max Stats command to “become all-powerful in the blink of an eye.”

The game finally make its way to iOS when Apple expanded the size limitation on apps from 2GB to 4GB. According to the App Store description of the game, it take 1.66 GB of storage space but require more than 4GB of free space to download. However, the game is compatible with the iPhone 5s or later, the third-generation iPad or later, and the iPad mini 2 or later. 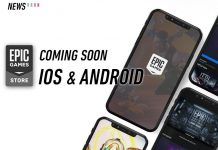