Having used the MSI GS60-2QE for a good one month, its finally time to settle down to make a full review of this powerful and addictive gaming laptop, I was indeed spoilt by the Inspiron 14 7000 that we reviewed a couple of months back and MSI has destroyed me even further with the GS60-2QE gaming laptop, it is an extremely lightweight machine yet the company managed to pack the most powerful hardware internals into the size of a laptop. What does the GS60 offer no other gaming laptops can? Let’s dive in. The word ‘gaming’ on a portable computing device has always lead to the impression of bulky and heavy devices that you will not dream of lugging it around, MSI has decided to redefine gaming laptops by producing a lightweight yet discreetly powerful product like the GS60-2QE. Our review unit here is a hardware refreshed model, the laptop measures 19.9mm and weighs a mere 1.9KG, which you can’t tell from the pictures alone but you really have to be present to hold it – its really light! While most gaming laptops will look really funky with cool curves, fancy lighting or probably as boring looking as a business laptop, MSI has done things differently with the GS60 and has made it look extremely premium and expensive with the Stealth Gold edition we have here, some folks actually thought this is some kind of limited edition laptop when I brought it along with me. While MSI’s laptop keyboards are engineered by gaming peripheral maker SteelSeries, the GS60’s keyboard isn’t a mechanical one and it still delivers a great typing experience when I use it for editorials, gaming is also fine however serious gamers will still want to use their own trustworthy mechanical keyboard if they were to really game on it as the keys feel pretty fragile when you are mashing them in the middle of an exciting game.

In order to make a thin laptop, there has to be compromises to be made however for the GS60, MSI has merely omitted an optical drive which is fine for most users however they aren’t stingy on offering a number of input ports – 3 x USB 3.0, 1 x HDMI 1.4, 1 x MiniDisplay, 1 x Killer Gigabit LAN and 1 x SDXC card slot. Lugging a 15-inch laptop in your bag that weighs a mere 1.9KG is like an impossible dream coming to real life despite not being as light as an Ultrabook, the fact that is a powerful gaming laptop really makes you feel that you can simply turn on the device and work away really fast thanks to its beastly dual M.2 SSD RAID 0 configuration. 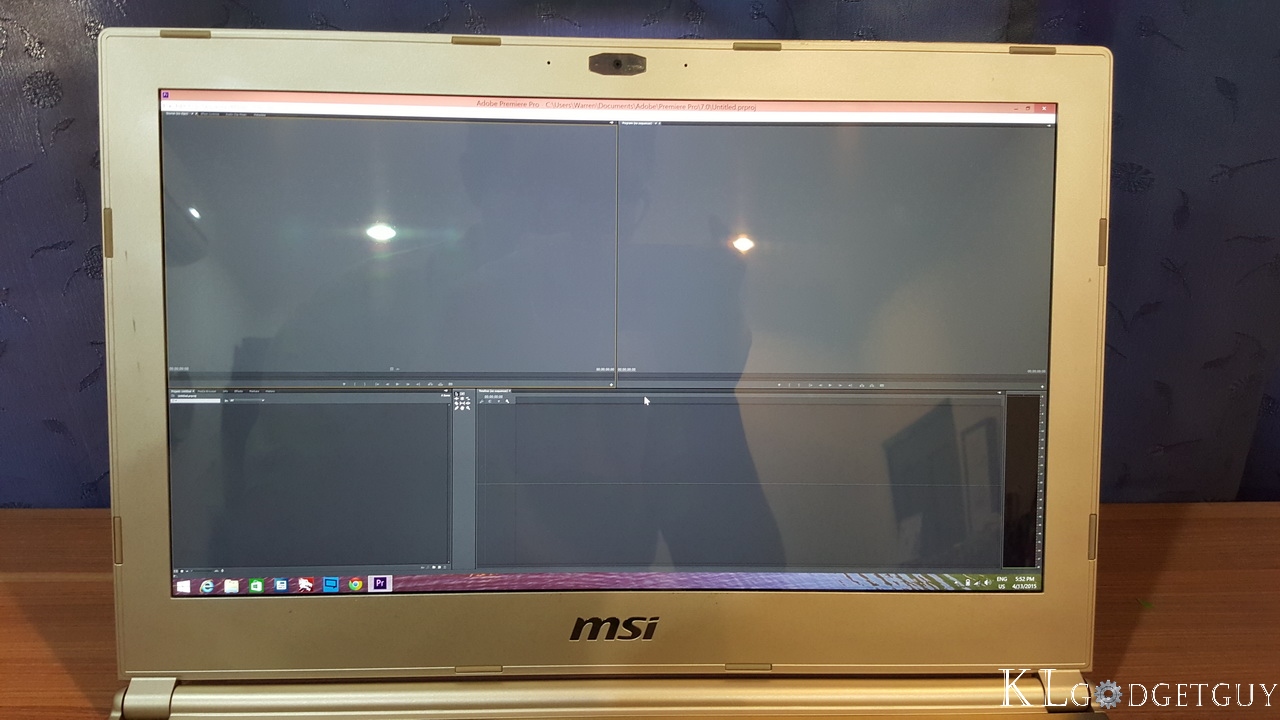 Given that this is a gaming laptop, the GS60’s 4K display is definitely a necessary feature and the GeForce GTX970M graphics card is able to handle some games in that resolution without much issues, however the real problem here is working on applications such as Adobe’s Creative Cloud software suite, the icons are so tiny and there’s no way you can scale them up, text are at times tiny in user interfaces that you could really get frustrated in working on a written document. Of course, this could probably be resolved after Windows 10 goes live. The gaming experience on the GS60 can certainly be on par with your mid-high end gaming rig, MSI has made it so powerful that it can literally replace your rig, the GeForce GTX970M delivers extremely good graphics performance in most of the games I threw at it, though most modern games like FarCry 4 and Dying Light won’t run at UHD resolution, playing at the screen resolution of 2048 x 1152 still isn’t too bad and I still managed to achieve an average 40-48 fps on Ultra settings. Once you start playing older games and turn the settings up to max, you’ll start embracing the display that MSI has provided.

The GS60 definitely has its perks of being a powerful laptop yet having a reasonably slim form factor, its cooling system is efficient enough to dissipate heat fast after finishing a game, however the chassis can reach extremely high temperatures which you do not want to touch on it or playing games on your lap, thankfully the keyboard and palm area remains a comfortably warm temperature at 34-36 degree Celsius, which means you can still game comfortably on the desk in an air conditioned room. Heed our advise, don’t use the laptop outdoors.

With such powerful hardware internals, the GS60 is an extremely power hungry laptop despite having packed a power efficient GPU onboard, bear in mind that it needs to power a 15-inch UHD resolution display, that fancy keyboard lighting and a super fast Core i7 processor, the laptop merely lasted us 2 hours and 45 minutes for productive activities on ECO mode and gaming on NVIDIA’s BatteryBoost will give you 1:30 of battery life, which totally makes sense with a 6-cell battery, so make sure you carry the power adapter along with you.

While the GS60 is an extremely capable laptop, it isn’t one that can deal with 4K gaming all the time judging from 3DMark’s Fire Strike Extreme tests, its dual M.2 SSD configuration does make the laptop a beast though, we’ll let you be the judge on the scores here.