As you know at KLGadgetGuy, we love and admire everything about tech. As Editor-in-Chief at KLGadgetGuy, I personally want to express my view and love for this great Japanese animation movie – The Wind Rises, the last Japanese animated film from Hayao Miyazaki (宫崎骏), this is a touching film based on the biography of Jiro Horikoshi, a famous plane maker during the World War II. 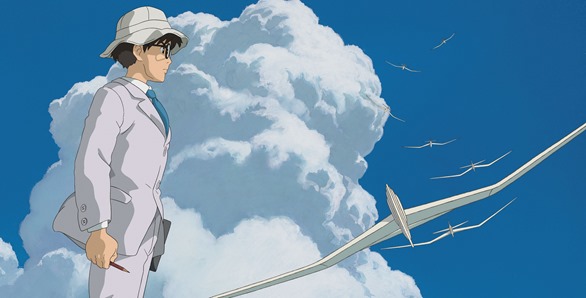 The plot of the film begins with Jiro dreaming to build a plane of its own and a famous Italian plane designer Giovanni Caproni inspiring him to build amazing planes, which of course looks pretty fictional and unreal in the film but definitely inspiring enough for someone with a great dream who wants to build a plane. And during that time, Japanese plane engineering wasn’t that great and Jiro was being seen as genius that time, he was being appointed at Mitsubishi to build a fighter jet for the Japanese army. The Wind Rises chronicles much of his life, and depicts key historical events that affected deeply the course of Jiro’s life, including The Great Kanto Earthquake of 1923, The Great Depression, the tuberculosis epidemic, and Japan’s plunge into war. The Wind Rises comprises elements of love, dreams and passion, the most touching part of the story is when Jiro meets Nahoko, a girl whom he met during a train ride to Tokyo for studying and they both witnessed the occurrence of the Great Kanto Earthquake, Nahoko’s maid broke her legs and Jiro helped to lessen her pain by bandaging and stabilizing it with his engineering ruler, after that he offers to carry her home safely, Nahoko then remembers Jiro for his good deed and waited patiently over the years for a chance to meet him again as Jiro left without mentioning his name. After a few years, both Jiro and Nahoko met again in a beautiful meadow where Nahoko is seen drawing a portrait, during that time Nahoko has been infected with Tuberculosis which is incurable. Despite of that, Jiro and Nahoko’s love grew stronger than ever and they got married with the blessing from Jiro’s supervisor. Lastly, the story ended with Jiro being with Captain Caproni again to look at a great finished plane while Nahoko telling Jiro in the wind to move on happily with life even when she’s gone.

Contents hide
1 What’s all about this at the end of the day?
2 KLGadgetGuy invites you to ANIMANGAKI 2014 and buy The Wind Rises DVD at RM29.90

What’s all about this at the end of the day?

At KLGadgetGuy, we want to promote great work and innovations, which leads back to Hayao Miyazaki’s great work that involves a combination of raw artwork and computing animation, Hayao Miyazaki isn’t really a tech lover but he likes to draw and create animation, always reminding people that technology isn’t everything when it comes to a production of a great film. The Wind Rises is one of the most beautiful Japanese animated films that I have ever seen, it has a combination of great artwork and computing animation that will touch your heart and implant a unforgettable memory in your mind.

KLGadgetGuy invites you to ANIMANGAKI 2014 and buy The Wind Rises DVD at RM29.90

Missed the movie in the cinema and watch to watch this great film, KLGadgetGuy invites you on behalf of the ANIMANGAKI team to visit the ANIMANGAKI 2014 event happening at Sunway Pyramid Convention Center this weekend, you will be able to purchase The Wind Rises DVD on the spot at RM29.90 and of course, there will be merchandises waiting for you over there. If you can’t visit the event, the DVD is also available at media retailers like Speedy Video and Popular Stores nationwide. Mark your calendars and head over to the event tomorrow, remember to give me a shout if you happen to see me and I can show you the greatest gadgets I have on hand.