The original Fonepad from ASUS is an affordable tablet that attempts to combine phone call functionality similar to Samsung’s GALAXY Tab. Recently, ASUS started to introduce two additional members to its Fonepad portfolio and we’ve got the ASUS Fonepad Note FHD 6 in our labs. The 6-inch phablet from ASUS is the company’s response to Samsung’s GALAXY Note 3 as it also features a built-in stylus. 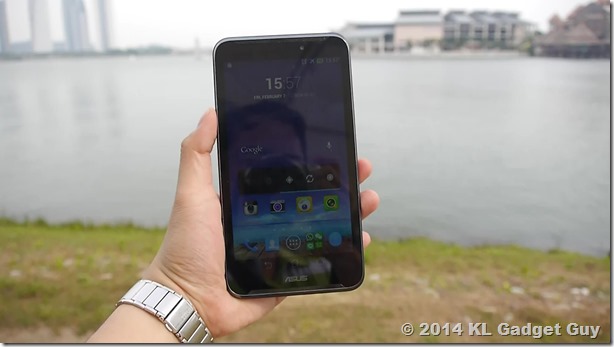 The Fonepad Note FHD 6 may look like an expensive device on first look, once you get a hands on experience with it, your perception changes as the phablet is huge, bulky and heavy, and we aren’t sure why ASUS would’ve designed the product in this way, given the fact that its Padfones and Transformer tablets are lightweight products. 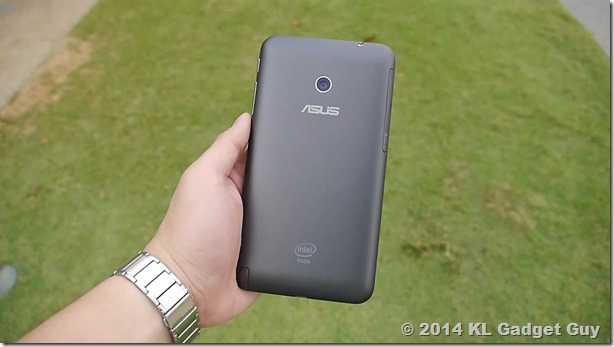 The design language of the Fonepad Note FHD 6 is very similar to its predecessor with the same executive-like dark grey metal finishing on its back cover and a full black surface on the front. Most importantly, it doesn’t squeak like a cheap plastic device. ASUS mentioned on its product site that the phablet is a pocket friendly device. Of course, this only works if you have deep pockets, or else you will have the device sticking out of your pockets. Again, why can’t they just make the device slimmer? What’s the bulkiness all about? The Fonepad Note FHD 6 may be huge, but it is neither a performance beast nor a weak baby. Nevertheless, you will need to know that the table below powers the device

We are missing NFC and LED flash for the main camera, which shouldn’t be happening on this tier. If you’re already an Android user, ASUS’s user interface will make you feel at home with its simple navigation and very light UI customizations. Just like its predecessor, the Fonepad Note FHD 6 maintains many aspects of Android in terms of usability, however those slight cosmetic changes can slow down the device at times despite having decent amount of RAM and CPU power. 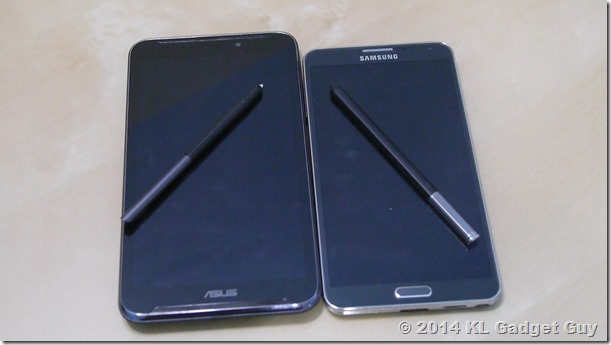 We always want to do more with our devices when we purchase a large screen device, the Fonepad Note FHD 6 unfortunately doesn’t really allow us to do more. The number of widgets given by ASUS isn’t generous and we can’t find any interesting ones to be used on our home screen. Instead of using a 5 by 5 app drawer arrangement, ASUS have chosen to stick with the traditional 4 by 4 configuration, which means you’ll need to swipe more to reach the app that you want. Nope, it doesn’t have a quick navigation feature either. Multitasking is what makes a phablet useful, ASUS didn’t include things such as floating widgets or even multi window on the phablet. We could sound bias or spoilt by Samsung’s offering but we certainly think ASUS could do better in the software department. 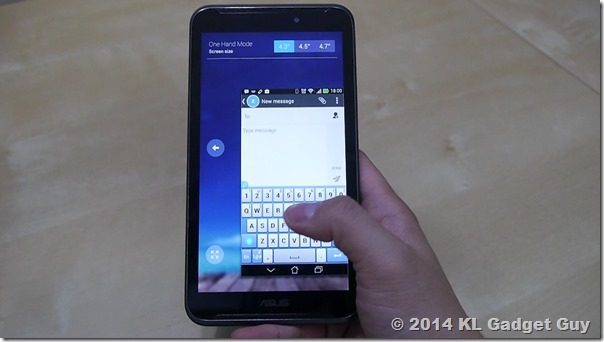 One handed operation is a crucial feature for 5-inch and above displays, ASUS implemented this in a poor way; it can only be activated by pulling down the notifications bar, try doing it with one hand and you’ll know what I mean. Despite of that, it isn’t a joy to use the phone one handed due to its bulky form factor. The built-in stylus feels cheap and doesn’t really help much in everyday usage, you’re only able to navigate webpages and home screens with its hover feature, scribble notes with SuperNote and cropping an image. The Fonepad Note FHD 6 isn’t a productivity device as you can see, but it excels in the entertainment category. The most obvious feature is the dual front stereo speakers at the top and bottom of its display, a design which can be found on HTC devices today. Though it doesn’t possess the BoomSound quality, the speakers produced crisp and clean sound, making music listening and movie watching a great experience. AudioWizard is a great equalizer we loved in ASUS products, the Fonepad Note FHD 6 brings back this great feature, and it finally works in both speaker and headphone mode. Though we wished that ASUS allows us to tune the equalizer manually or change modes automatically. The Fonepad Note FHD 6 has a great screen and the ergonomics for gaming but is sadly limited by the processing power and PowerVR GPU, graphics intensive games such as Asphalt 8 can get choppy at times, but thankfully there were no app crashes in playing most games. In conclusion, the Fonepad Note FHD 6 is made for entertainment rather than productivity, and we can’t think why ASUS can’t combine these two to make a balance in phablet features. Let’s hope we see some software improvements coming to the phablet soon. 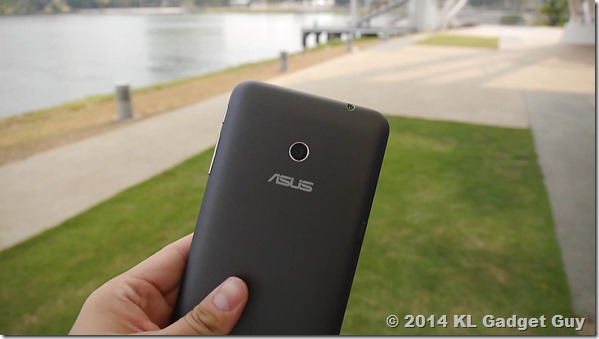 The Fonepad Note FHD 6 may have a humble 8 Megapixel auto focus main shooter with no LED flash, it is by no means a bad image sensor. In fact, the camera manage to capture image with great detail, though pictures can sometimes come out too grainy or over-saturated, but it is certainly usable as a point and shoot camera. Check out the album below for pictures taken with the phablet. 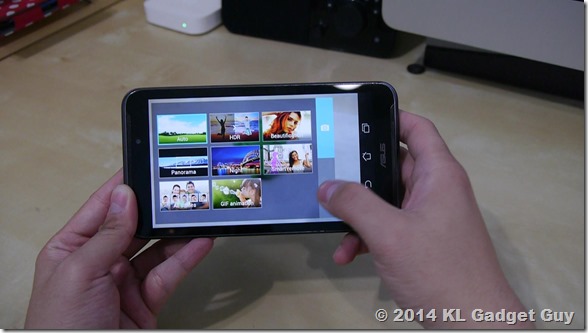 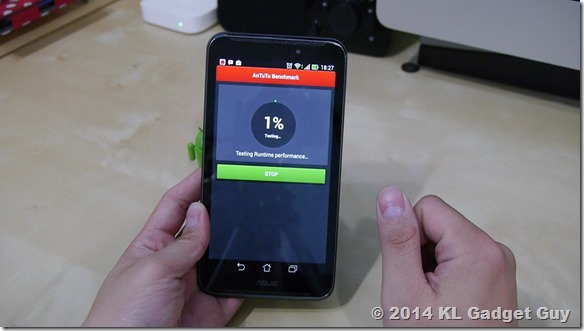 We have to do benchmarks, despite how we hate to run those tests, simply because we already talked about the real experience you’ll get throughout the review and there’s simply no necessity to run benchmarks. However, we are still giving you benchmark numbers from at least two popular benchmark apps – Antutu and Quadrant. 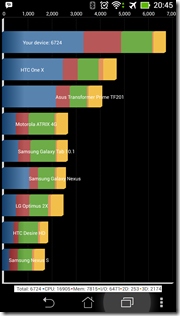 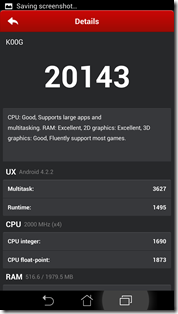 he results are pretty much the same as the Lenovo K900 we reviewed last time as it has the same internals. 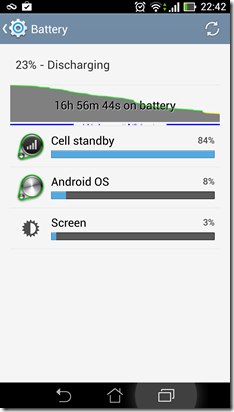 ASUS rates the Fonepad Note FHD 6 to have a combined battery life of up to 17 hours, and we find that to be accurate if the phablet is being used to perform light to mid weight tasks such as an hour of music streaming, some web browsing and instant messaging, a few phone calls and always on HSPA+ data connection. Call quality over Maxis HSPA+ is good with no call drops, callers also reported clear sound from our end even in noisy environment. The ASUS Fonepad Note FHD 6 is clearly a phablet made for entertainment with its gigantic 6-inch full HD IPS display and dual front stereo speakers, people who wants an affordable huge screen smartphone is going to love this. As for the productivity side, we simply wished that ASUS can perfect it in the next software update or probably the next iteration. The device is now available for purchase at RM1399, which is cheap for a phablet but expensive for its internals, if you’re willing to spend an additional RM200-RM300, you’ll be able to get smartphones with LTE and NFC capabilities. As usual, here’s a summary of the good and bad: 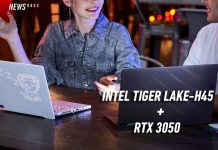 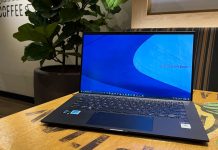