A smartphones and tablets get more advanced features and apps, storage has become insufficient for us to store media in our devices. While USB OTG (on-the-go) has been supported on most smartphones today, many still do not know its usage and smartphone makers don’t really market this feature. Introducing the AH171 from Apacer, probably the cutest flash drive that we’ve seen on earth that has a built-in MicroUSB connector for expanding your device’s storage. The Apacer AH171 requires no additional software to work, it is cute, small, and just works when you connect it to your USB OTG capable smartphone and tablet. A MicroUSB to standard USB adapter is also included for transferring files from your PC 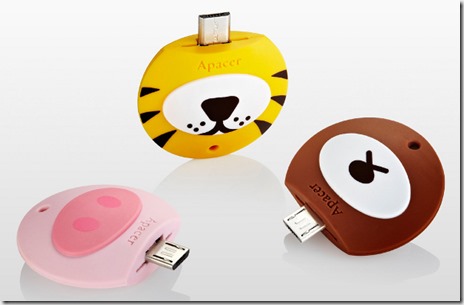 This cute flash drive comes in three designs and supports up to 32GB of storage.

The AH171 also includes a tiny hole for slotting in a lanyard. Unfortunately, it doesn’t come with a lid to protect the MicroUSB connector, be careful to store it properly to avoid twisting it. Apacer didn’t state any transfer speeds on the package and we’ve certainly hoped for at least a decent one at 10-14MB per second. We used CrystalDiskMark to perform a 100MB file transfer test and got a maximum read speed of 23MB/second and write speed of 10MB/second, which we initially think was great enough to transfer huge file sizes. Sadly, when we tried copying a movie file, transfer speeds seemed to reach a maximum or average speed of 7MB/second, which is rather disappointing and you might feel that pain on transferring gigabyte file sizes. The Apacer AH171 is simple and convenient, users who require more storage on their smartphones will certainly appreciate the usability of it without a USB OTG cable tangling on their smartphones, however the transfer speed could be better, the AH171 retails at RM99 for the 32GB version. Here’s a summary of the good and bad.

– Dependent on standard USB connector to transfer files, which isn’t easy to find in the market