After three weeks of testing, we come to a final round up review of EMAGINE, a media player that changes the way you watch and interact with your TV. EMAGINE is a media player box that offers a great user experience, it not only offers video and music playback but also bundled with useful applications which is fun and something that other competitors do not offer out of the box.

EMAGINE’s box is big and interesting, once you open the box, you will be greeted with protective sponge that covers the device, a big box that includes the remote control, HDMI cable, 2XAAA batteries, AC adapter and three small screws – which suggests that the device can be mounted to a wall. EMAGINE’s input ports include 3XUSB 2.0, 1 HDMI, 1 SD Card slot, and 1 Gigabit Ethernet Adapter and supports Wireless 802.11b/g/n.

EMAGINE is a superb performer in video features, it’s on demand video service relies on online video service – YouTube and Vimeo. You definitely will not realize this until you see some attributes of YouTube when browsing the videos (for e.g. Views, Author). The shining part of it’s on demand videos is it’s categorization feature, which makes these online video services more interesting to watch. For example, if we go into a Technology video category, it presents us with popular technology channels, saving time for you to go looking for videos that you want to watch. The streaming speed is fast and you can even share the video that you’re watching to Facebook or with the EMAGINE community.

What makes EMAGINE so special in it’s video features is when you have activated an EMAGINE account. Having an EMAGINE account is similar to having a social network account, you get to watch and share videos with the EMAGINE community, you can even create your own playlists to make people watch them. Additionally, it also allows you to bookmark that video on your computer and watch it on EMAGINE. EMAGINE also supports watching videos from your storage device or shared folders on your computer. It supports most popular formats such as MP4, MKV, AVI, MPG. Playing 1080p videos on it is a breeze and the video seeking time is so fast that it is faster than your computer. However, RMVB is not supported at the moment, which can be a deal breaker for some but we hope EMAGINE will figure out their licensing issues with Real Media soon.

When a device supports watching videos, it obviously supports music playback as well. EMAGINE includes online music streaming service such as Grooveshark, Shoutcast Radio and Icecast Radio. Also, it supports streaming music from your storage device or shared folder on your computer.

Grooveshark is a great music service that you can upload your music on to it and listen to music uploaded by its users. It offers a huge variety of latest pop music that you can listen to. Grooveshark on EMAGINE streams music well however there are bugs at the moment such as unable to retrieve your account’s playlist and it may cause the system to be unresponsive at times.

Probably the best music application on EMAGINE, it offers very nice radio station categorization and streams quality internet radio to your speakers, you will definitely love the quality of it.

At this time of writing, Icecast Radio is not working on our side and simply refuses to load up contents.

Surprised? EMAGINE is a media player that is able to provide Karaoke service, and I mean YES, you can play music videos with lyrics and even mute the singer’s voice and sing your own way. The features of OK.TV is very similar to karaoke centres and “singing kakis” will definitely feel at home when they use it. It also has a great range of songs with different languages and dialects. The service is free for a one month trial and chargeable at RM19.90 per month, saving you lots of trips to Karaoke centres.

EMAGINE’s built-in media player works fine however the interface can be improved such as music browsing, they should allow users to browse their music by having categories such as Artist, Albums etc. Additionally, it supports lyrics but it’s merely a companion to the music player interface. The music interface can be much more interesting if they add on visualizations and by having a flatter design. Take Windows Phone’s or Windows 8’s music interface for instance.

EMAGINE includes apps such as Facebook, Twitter, Intel’s WiDi, RSS Feeds, Picasa and 4shared. Facebook and Twitter offer a good experience out of the box, Intel’s WiDi requires a supported network card to work on. RSS feeds is a bit of a let down as you can’t add your own feeds, it would be nice if they include a mini browser to show the full news content if required. Picasa and 4 shared is quite useless as they can only be used to search content but not retrieving contents from your account.

EMAGINE is doing something new here which you are able to do shopping on your TV, they are currently partnered with Lazada Malaysia and you can only purchase electircal gadgets at the moment. This is a futuristic feature and EMAGINE will have to work hard to get partners in and adapt its users on using this feature, or it could be a wasted effort.

Even though EMAGINE is a good media player, its features are still not perfect and the overall performance of the system can be improved but it is not too bad at the moment. The product is fairly new at the media player market but you definitely see future in its features and the company’s improvement in differentiating itself from its competitors. 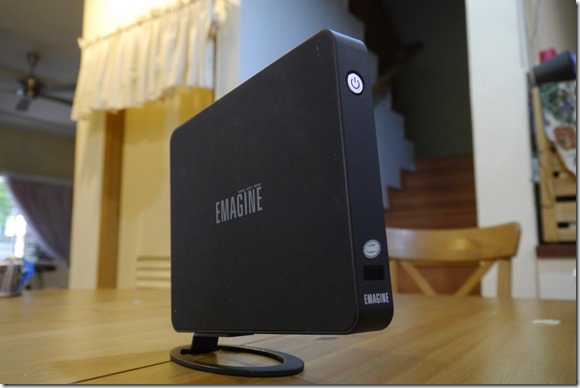 We rate EMAGINE a 4/5 stars for its attractive price tag at RM399 and its service offerings. EMAGINE is currently available at Lazada Malaysia with free delivery and it should be on retail stores real soon. At KLGadgetGuy.com, we would like to thank Select TV Sdn Bhd and Chief EMAGINEER James Chong for lending us this unit for review.